Off the Record with Ache Frontman Ryan Bland (Part I)

Whenever choosing an interview subject for this blog or any other outlet.
My approach has nothing to do with the agenda of a band, release date or approaching event. Honestly, it's never had anything to do with any deadline or time frame.
In doing United By Rocket Science, I've been given the chance to reach out and connect with people on a level that my own shyness or insecurities might not allow otherwise. Approaching Ryan was easy though. Having fronted bands such as The Bushmon, Home 33, Dead Serious and most recently Ache. Ryans aggressive stage presence and vocal approach are intimidating and downright animalistic. In person, it would be hard to find a more approachable, personable and real person. I originally approached Ryan about an interview shortly after I caught his band Dead Serious back in July 2013. For reasons unknown, I just never got around to it. In retrospect, I'm glad I waited. It's given me time to get to know him a bit. Time to step back, observe and learn. In Part 1 of what hopes to be a three part interview. I reached out to learn a bit about the music he's created both past and present. Here's what he had to offer. Thanks Ryan, James Damion

James: My first memories of you was your hanging from the ceiling pipes at The Pyramid Club with Home 33. 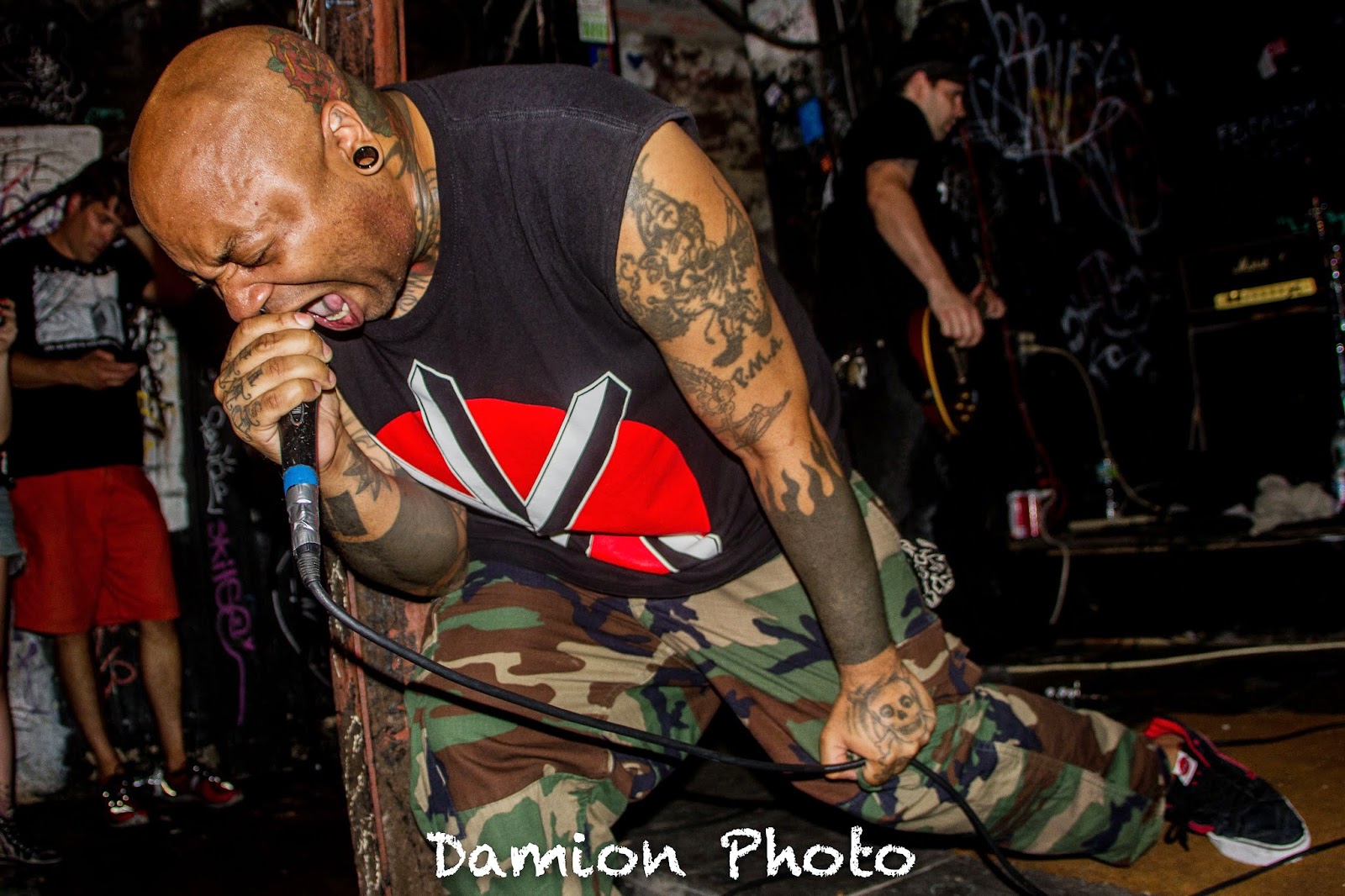 Can you tell me about how you became involved with New York City's underground music scene?

Ryan: I became involved with NYC Punk underground around 1988. My first real band was called Bushmon. We were basically a hardcore & Ska band. We were CBGB regulars from late 1991 until we played our last ever show at CB's in 1993 to a sold out crowd.
One band that always played with Bushmon was a Brilliant hardcore band called Opposition. When Opposition & Bushmon broke up some members from each band formed Home 33. Home 33 was where I really cut my teeth in NYHC. Sharing stages at early shows for bands like H2O, Earth Crisis, Candiria, V.O.D., 108, Downset, Madball, napalm death, NRSV, Fahrenheit 451 & many other greats! It was the 90's and the NYC underground was killing it!!!

James: There's been talk of a reissue of Jody's Coterie. How did the opportunity come about? Will there be bonus material or fun surprises? 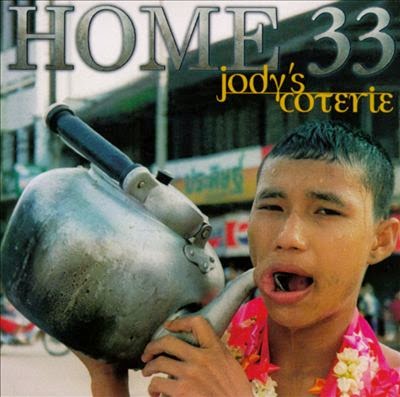 Ryan: Yes!! Roger Lian
(who was the original guy who mastered the Home 33
"Jody's Coterie" album in 1995) & Me got into a conversation on Facebook. He told me my old band Home 33 was his first job. He got a lot of work after working on that record. He went on to mastering albums for Slayer, Candiria, Joan Jett, Pantera & countless crazy dope albums. I told him I wanted to make Jody's available as a free download to any one who would want it or remember it. So Roger offered to remaster The album. It's done & it sounds better than ever.
I'm super busy with my current band ACHE so the Jody's Coterie project is slowly but surely going to bleed some ears in the future. I also plan on a few other Home 33 recorded surprises when I get the time.

James: I remember how floored I was the few times I saw Dead Serious live.
The band seemed to have a lot of potential. What led to the demise of the band?

Ryan: Thank you very Much!! I was floored by Dead Serious too! I mean bloody on the floor in the pit!! Lol That was a blast! Raw & Punx as fuck. After the Guitar player Mark had to leave the band & eventually he moved from NYC. It wasn't really the same after that in my opinion. Mark took some of the fun with him. I also think after he left the remaining members started moving in different directions Musically. So we decided to do other bands.

James: While the demise of Dead Serious seemed a bit premature. It was the quick rise of Ache that seemed to take a lot of people by surprise. Can you tell me how the bands personnel came together and how quickly you were able to build the chemistry you seem to share?

Ryan: The Dead Serious drummer Ryan Seit & I wanted to stick together. Mattakins, my Ache guitar player was playing in NYHC band Abject! Matt & I were friends from hanging at his shows. He offered to help out Ryan & I until we found members for a new band. It just so happens Abject! breaks up soon after and Matt decided to stay with us & we all started ACHE. Rey Brutal our bass player has another band. He is the lead singer & guitarist for NYC Thrash band Bomb Scare. Rey & I became friends at Bomb Scare shows. I'm a huge fan of those dudes. So I feel super lucky to be playing with all these dudes in Ache.
All of us are real friends & it's nothing like making music with your real friends. 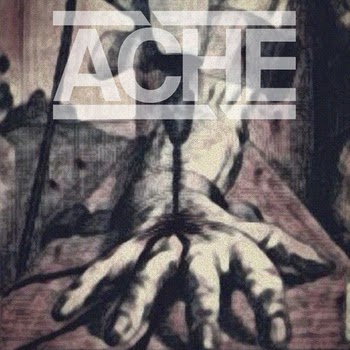 James: The demo received it's fair share of praise from numerous outlets. How do you feel about the bands official entry into the fray?

Ryan:  I think it's solid.
Stoked some people liked it! Hands down any credit for the demo goes to our Drummer Ryan Seit. He recorded & Mixed the demo. Not only is he a bad ass drummer but he's the man in the studio too.
He's currently preparing to record other bands so tell your friends and all that stuff. Word.

Ryan: Yes! We are writing an album & as of right now plan on tracking in January & February of 2015.

James: Unlike a lot of younger bands on the scene. Ache got out of their area code early on and played out of state with some pretty impressive bands. How did those opportunities come about?

Ryan: Mattakins, our guitar player booked us out of state. hands down my Favorite thing out of town so far was Boston for two shows. We played Boston Wreck center with
Opposition Rising & Foulmouth. They were all super nice dudes & everybody danced hard there. I appreciate the energy of the pit. It was a crazy bloody pit at one point. Females too, fucking shit up in the pit. I'm positive this one girl broke her nose. There was a lot of blood on the dance floor. Sick show.

James: Whenever the term Hardcore gets put into use.  The talk of family soon comes into play. Can you better explain that dynamic and how it's formed?

Ryan: Hardcore is absolutely my family. They excepted me as family. I was able to grab a Mic say anything on my mind. I had The chance to see other people express themselves in the same way. All the people I met in NYHC early on most of us didn't have a real home or a place that felt like home. We were truly angry outsiders making a home together.
These people became my sisters, Brothers so It's a feeling that you get in the community in the hardcore scene. It feels like family or blood relatives. I think if you haven't had that feeling at least once. I question you being a punk!!! Lol