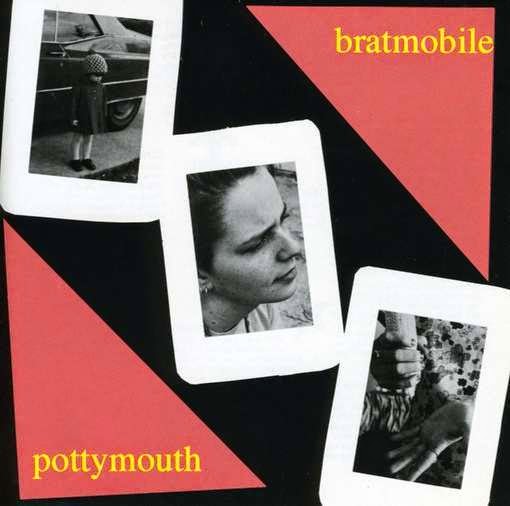 Inspired by it's cover, my recently awakened love for Kathleen Hannah's Bikini Kill and the opportunity to hear a long forgotten 90's band for the first time. I ordered a copy of Bratmobile's Pottymouth.

Pottymouth features that all promising cover I mentioned, is pressed on pink vinyl and includes a download card for the album which offers four digital only bonus tracks you won't find elsewhere.

Originally released in 1993 on Kill Rock Stars. Bratmobile were major players on the
North West indie scene and an important part of the Riot Grrrl movement. Influenced by both Punk and Grunge. They took their influences and made a name for themselves. Though a number of steps behind on the musicianship skill level. Bratmobile's sound and message can easily be compared to acts such as  Bikini Kill, Sleater Kinney, L7 and Babes in Toyland. Now, twenty plus years after it's initial release. Pottymouth gets the reissue treatment.

While I'm probably in the minority here. I found Pottymouth to be one of the least rewarding and most disappointing listens in recent memory. Wolfe's vocals are so grating and out of tune, they almost welcome the sound of nails on a chalkboard. Add to it the rudimentary musicianship the band displays, a gag enducing cover of the Runaways Cherry Bomb and you have a reissue that time should have long forgotten. As one song led to the next, I found it's bitterness harder and harder to swallow.
Honestly, I can't imagine recommending this to anyone aside from the most die hard fan or tin eared listener.
If I can take anything positive out of my experience. It would note that listening to Pottymouth made me very angry. And if that was the initial intention, I'd declare it a success.
James Damion

Kill Rock Stars Get it Here
Posted by James Damion at 5:05 PM