Looking Back; An Interview with Drummer Samantha Maloney

Samantha Maloney is just plain Bad Ass. A graduate of the New York School for Performing Arts, she first earned praise as the drummer for New York Post Hardcore favorites Shift.
She was later invited to fly out to the West Coast to play with Courtney Love and Hole.
Since moving to California she's kept the beat for rock legends Motley Crue and one of my favorites The Eagles of Death Metal. Since this interview she has become the host for
Mania TV's All Access where's she's interviewing some of the biggest names in the Rock World. Be sure to tune in every chance you get. JD.

James : How old were you when you first started drumming?

Samantha :
I Think I was about 12 or 13 when I first became interested in drumming.
I know It was after I heard a cassette tape of "Appetite for Destruction" on my friends boom box on a porch in Queens one summer night.
I remember that as clear as day. At the same time my parents took a chance and invested in a little thing known as cable TV. It was then that I became a MTV Headbangers Ball addict on Saturday nights.
My life had changed as I had known It.

James : What was your first band?

Samantha : I am horrible. I don't remember the name. I was in Sam Ash in Queens buying some drum gear when I was 14 or 15 and was approached by some boys from the neighborhood who were starting a rock band. They asked me to jam with them.
We rehearsed in my basement. I wish I could remember what we called ourselves. I am sure it was a fantastic first. I am proud to say that, when I get recognized as the drummer for Shift. I grin from ear to ear.

James : Shift was one of my favorite bands. I still listen to them regularly. I've even included "Best Song I Ever Wrote" in my DJ set. Can you tell me about some of the bands finer moments?

Samantha : Thank You! It is so interesting that Shift keeps getting brought up lately in my life . Maybe it is time for a lil reunion? Ha!. I am proud to say that when I get recognized as the drummer from Shift, I grin from ear to ear. It means more to me than any other band I have ever been a part of. Shift was my first "real" band. Finer moments.. Um.. There were so many moments.. For us it was so great to play shows with bands we had at the time looked up to like Burn, Quicksand, Into Another, 108, and even the Foo Fighters. I remember when our Bass player Brandon stuck his finger in an industrial sized fan at the Tune Inn in Connecticut and ..show was cancelled.. He is lucky to have that finger today . Or when Brandon would randomly jump out of our van while it was moving.. he still has his legs.. those were Brandon's less than finer moments.

James : You went to New York's School for the Performing Arts. I can imagine that was an amazing experience. I was wondering if you ever had a moment when you spontaneously burst into song and dance on the streets of NY like in the movie or the TV show.

Samantha: I found myself doing more of a Mary Tyler Moore thing of flinging my hat in the air into oncoming traffic on Amsterdam Avenue everyday when school was over.
Actually.. Fame ...as it is also known as.. Is an incredible high school and I am very proud to say I went there.

James : How did the opportunity to play with Hole come about? 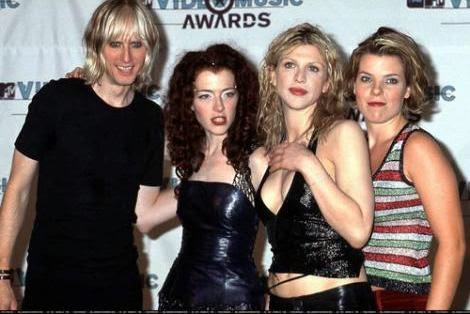 Samantha :
Shift had some downtime in May of 1998 . We had just got off the road and had another album to make with Columbia records. I got a call one night from my rep at Zildjian, my cymbal sponsors. They said that in 3 days Hole was auditioning drummers and asked if I would like to audition for the gig. If I did, I would have to fly to LA . and learn the first 3 songs off of their album "Live Through This". Problem was I had never heard that album. (Side-note: To this day I don't even own a Nirvana album! .. anyway..)
I ran to tower records on West 4th in the village that night.. bought the album to see if I even liked the music.. and was blown away at how good the album was. I thought ..
"Well.. let me just audition.. what do I have to lose besides 600 bucks on airfare."
So I flew to LA 2 days later. And I got the gig that night. They had auditioned over 20 girls and chose me.. took me to lunch the next day, and asked me to fly out the next week
(on their dime this time of course) to be in their video for their first single off of Celebrity Skin. Problem was .. I was still in Shift. So I had to decide what to do. And at that time I thought it was an opportunity that I couldn't pass up. And and as bittersweet as it was, the boys in Shift ultimately agreed.

James: I really like Courtney for some reason. It's like slowing down the car to see Is she really as crazy as she seems to be?

Samantha : Do I really have to answer that? I think you probably know the answer.

James : What about Motley Crue. That seems like an insane situation.
Did you get the feeling you were joining the circus?

Samantha : Motley Crue was my childhood fantasy come true. I used to play along to their albums in my basement in Queens and 10 years later I was onstage.. in the band! It was an awesome experience. I was 24 and living in a dream.

James : You stepped into some big shoes. how long did it take before you felt you were accepted by both the band and the fans? 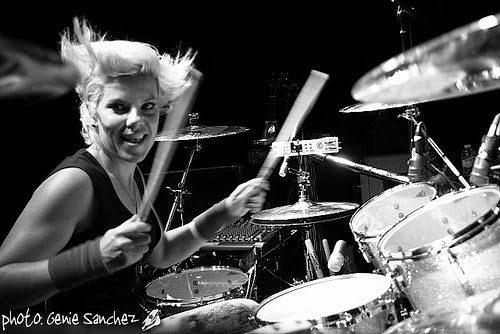 Samantha :
You know what they say about big shoes........ big socks.
What is so funny is that I met Tommy when I was playing in Hole. He came up to me at a Howard Stern Penthouse party in NYC I was at one crazy night after a
Depeche Mode concert at The Garden and told me that I had beat out his sister in the Hole Audition.
I had no idea his sis played drums. And to be recognized by Tommy Lee... I was floored...
he knew MY name! Motley and Tommy were completely accepting of me being in the band.. They asked me to play for them.. And as for the crowd.. well it took one or two songs before they realized.. holy shit.. this girl CAN play. VH1 did some documentary about it.. and to see the fans reactions before and after the show was hilarious. Fans were skeptical that a girl could pull off Tommy's parts.

James : Eagles of Death Metal are so amazing live. I saw the band with Joan Jett in New York City and recently in California with Queens of the Stone Age. I love his interaction with the crowd and how he makes the audience feel so special. I was wondering how much of that stage persona is a show and what's real.

Samantha : EODM is such a fun band to be a part of. Their nickname for me is
"Hot Damn Sweet Sam". I played with them for about a year. As far as lead singer Jesse's stage persona.. that is all him. ALL THE TIME.

James : You moved from NYC to L.A. not so long ago. Is that working out for you?

Samantha : So far so good. I miss my family dearly and miss pizza and bagels extremely.... but other than that.. I am living the good life out here. (Jokes) You know: the basics.....
Sex, Drugs, Rock n Roll.. fast cars, fast men, fast money.. fun in the sun. California gets a bad wrap. But I tell people .. its all about your friends.. your friends are your family out here.. so choose wisely. And they say that out here it is all who you know. But some also say...
It's all about who knows you.

Samantha : Family, Friends, My peeps from the hood, Bagels, Pizza, Century 21 (the store) ,The four seasons (not the hotel), the train, WKTU.. Freestyle music, NYC street style .(I am generalizing.. but...seriously.. California girls spend shit tons of money on bullshit clothes and have the worst style.) Blimpie, Chinese Food, Zeppoles, Manny from Glassjaw, Josh Swank from E Circuit, Leeway, Hardcore, Sick of it All and The good ol'e days.

James : Any advice for musicians looking to get into the ugly business of rock n roll?

Samantha : Don't do it!!! Unless there is nothing in the world you can imagine yourself doing. And you better have the chops and skills to back it up. This is unlike any other profession. There are NO guarantees. There is no money unless you hit it big and work your ass off. You must learn everything about the business. You need to surround yourselves with people that are in it that are already successful . Then you learn from their success as well as their mistakes and failures. Believe me.. I'VE LEARNED FROM THE BEST. What to do.. and more importantly what NOT to do.. And only the strong survive. (didn't biohazard say that?) And you need a bit of luck too. But you only get lucky when you've worked very hard.