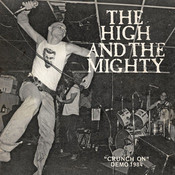 For all you NYHC archeologists, Radio Raheem just dug up a sizable bone in The High and the Mighty.
The band, which featured former and now current members of Antidote played alongside some of the more notable bands of that rarely chronicled time, a list which includes, but is not limited to Urban Waste, Heart Attack, Murphy's Law and The Cro-Mags, The Psychos, Mental Abuse and Token Entry.

The record cover and title serve as the best description as to what
"Crunch On" Demo 84' offers. Fast, loud and raw first wave NYHC straight from the demo. Though originally purchased as more of an add on to my
'The Abused - Loud and Clear' order. Only 500 copies of this record exist, so get it while it's still available. Record comes packaged with a 12 page booklet featuring lyrics, images and flyers. Some seen here for the first and most likely, last time. This little addition has served me well. It's good to see that, even thirty years later, some of these recordings are getting their proper releases, packaging and respect. Let's keep that nostalgia train going strong.
Who knows what's still out there.
James Damion

Big Cartel  Get it Here
Posted by James Damion at 11:02 PM