The Abused - Loud and Clear 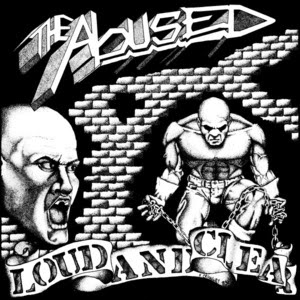 After years of rumors and talk of an official and definitive re-issue of The Abused epic 1983 release 'Loud and Clear'  Radio Raheem Records step up to make a true classic from New York Hardcore's early days available again.

'Loud and Clear' Collects 21 tracks which feature the "Loud and Clear" 7 inch, their 1982 demo and never before heard live tracks. If that's not impressive enough.
(And it very well should be.)
The album, which comes in all it's gatefold glory, is accompanied by an impressive 24-page, full color booklet containing photos, lyrics and the band's infamous show flyers drawn by their vocalist Kevin Crowley, as well as a sticker sheet replicating original Abused sticker designs. Classics like 'Wargames', 'Nuclear Threat', 'Blow Your Brains Out' and the oft covered 'Drug Free Youth' sound incredible. Essential listening for fans of early Agnostic Front, Cause For Alarm, The Mob and Urban Waste.

A lot of respect goes out to everyone involved with putting this together. The overall quality merits praise.Everything from the music to the art, layout, attention to quality and detail are so well done. It's great to see the band and it legacy get it's due. James Damion

Big Cartel  Get it Here
Posted by James Damion at 11:37 PM