It's been over a week since I laid down $130 dollars of my hard earned cash for this epic document of early L.A. Punk history. 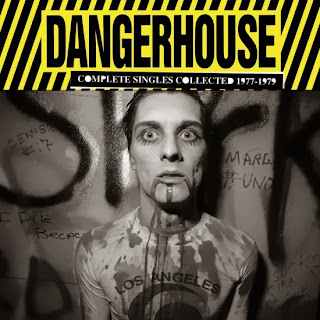 Having past on it weeks earlier at Princeton's Record Exchange, due to it's hefty price. The music, it's history and the fact that it was a limited one time release loomed large on my mind. So a few weeks later when I brought my purchases to the counter at Double Decker. I saw that box sitting in front of the register in all it's historic glory. I thought for a few seconds, turned around in the opposite direction and like any mindful shopper, returned my records to their proper bins. It wasn't that the price that had changed.
(If I remember correctly, they both bore the same price tag.) The bands, the history and that eye gouging image drew me in. Though there were a handful of artists included that I had yet to hear. I was more than prepared for a get to know. Looking back, I made a very, very good choice,

'Complete Singles Collected 1977-1979' does exactly what the title promises, 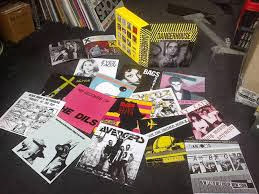 Collecting each of the fourteen EP's Dangerhouse released during the labels short, yet historic existence. EP's featured
(each with original cover art ) are as follows. Randoms,
Black Randy & The Metrosquad,
The Avengers, The Dils, Weirdos, Alley Cats, X,
Black Randy & His Elite Metrosquad, Howard Werth, The Deadbeats, The Bags, Eyes, Rhino 39 and yet another
Black Randy
& The Metrosquad. The packaging is authentic and flawless. A true piece of art.
As  I carefully opened the box and began gently reaching for each E.P. I felt more like an archeologist than a music fan or blogger. I was reaching for Punk Rock gold. Each piece, unique and amazing. Listening to the each one from Alley Cats to The Weirdos. Each one unique and special. Quickly, I realized what a special time it must have been. The Box is limited to 1,000 copies. Snag yourself a copy before their gone forever. James Damion

Frontier Records Get it Here
Posted by James Damion at 2:15 PM