Black Flag vocalist Ron Reyes has parted ways with the currently revived incarnation of the legendary band. In a post to his Facebook page, Ron reveals that he was fired on stage at the November 24th date of band's Australian tour and was replaced by professional skateboarder Mike Vallely. Reyes goes on to make several scathing comments about
Black Flag guitarist and mastermind Greg Ginn and the overall effort put forth on the band's new album What The...:

"The writing was on the wall since before we played our first show. So many things went wrong from the start. I was into things like having a good drummer, rehearsing and spending time on things like beginnings and endings of songs, being a little less distracted with tour life and a little more on the ball. 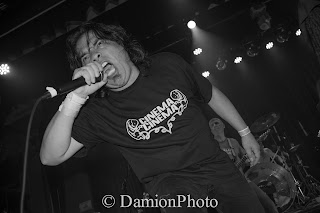 You know things that would make our efforts worthy of the name Black Flag... Yes it is my opinion that we fell very short indeed and the diminishing ticket sales and crowds are a testament to that. However It was made clear to me that raising these issues was tantamount to a blasphemous stab in the back to Greg. How could I question him, his efforts and hard work? How could I dare be a fan of OFF! And or be friends and a fan of Flag? I was told that I had to chose sides. But I refuse to treat someone like an infailible  Pope figure. No guitarist deserves such unquestioning blind devotion.
And so I have been excommunicated in a very strange fashion."

To say the very least. This whole Black Flag saga has been a complete circus. I'll forever look to the end of that crap movie 'American Hardcore' when Keith Morris laughs "It's over. It's been over for a long time." Save your money the next time they announce a tour.
Go see a Civil War reenactment instead. James Damion
Posted by James Damion at 11:13 AM