From '93 to Infinity - A Dromedary Records Compilation 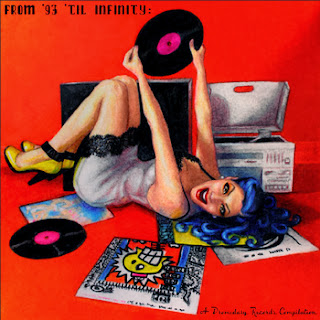 Local micro indie label Dromedary Records celebrate their twentieth anniversary with the release of
'From '93 to Infinity'. A clever and overall stellar collection featuring current and past Dromedary friends and family, putting the cover treatment on songs released in 1993.
The year Al Crisafulli followed his heart of hearts by starting his own independent record label.

'From '93 'til Infinity' features a hefty sixteen tracks delivered with quality and care. It's very rare when a compilation or tribute album resonates with the listener the way this does. Somewhat surprising, given the history of cover and tribute albums. Visit your local record store's dollar bin or Good Will store and you'll get a good idea. '93 'til Infinity' on the other hand, doesn't feature a wasted moment.

Picking the standouts from this album was like trying to decide what corner deli I want to pick up my winning Powerball ticket from. The quality and variety presented is astounding. Brixton Riot covering The Archers of Loaf's 'Might', Cinema Cinema's cover of PJ Harvey's '50 Ft. Queenie', Varsity Drag's take on Versus' 'Let's Electrify', Overlake's cover of
Yo La Tengo's 'From a Hotel 6' and D. Smith Sucks 'Fuck and Run' each shake the foundations. I'm also hearing a number of acts here for the very first time.
Riel, Dots Will Echo, Flash Flood, Picnic all deliver stellar covers. Other notable contributions come from the 65's, Stuyvesant, The Anderson Council,
Jean Homme & The Broken Telomeres, Guy Capacelatro and Tiger Saw. Add to that they eye popping cover illustration of Lauren Kelly and a few of my own photos thrown in for good measure and you've got a can't miss production that commemorates and celebrates the spirit and inspiration that was and is indie. James Damion

Dromedary Records  Get it Here
Posted by James Damion at 2:03 PM