D. Smith Sucks - The End of Everything

I was in the midst of telling some god forsaken Jehovah's Witness to get the fuck out of my building when a message came across my Facebook page. It was an old friend asking that I call him as soon as I got the chance. 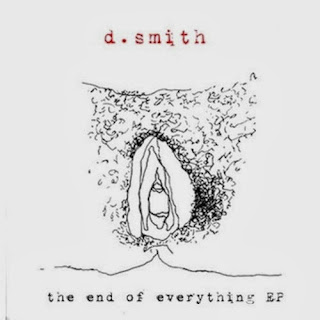 As I began dialing the numbers I imagined what awaited me on the other end of the line. Perhaps payback for my review of his bands performance at Camelfest II. Calling them out for being "not that pretty" without the presence of former bassist Cindie Merklee.
Or referring to the bands singer as an "arrogant prick". Regardless of any punishment
I was about to receive, a friend had asked a favor and I was going to do my best to help.
As Dan picked up the phone
I immediately felt as if I was talking to an old and trusted friend. He began to tell me about his new record, the band and if I'd help get the word out about how all proceeds from the recording would be going towards supporting  a local dog rescue. A cause that is near and dear to our collective hearts. I wholeheartedly agreed to spread the word, listen and give the songs on
'The end of everything' a thorough listen.

'The End of Everything' features seven songs of brilliantly raw and honest songs.
Each with a sense of quick wit. D. Smith has always delivered a dark sense of humor that can often be taken out of context as something that it truly isn't intended to be. Parts Punk, parts  soulful Folk with apocalyptic results. This is so real, so authentic. It makes me want to gather the friends and family for a full on intervention. It's as if I met my own dirty little secret. Though this might garnish a whole lot of attention in the long run. It's these little under the radar gems that stick with you the longest. Leaving permanent scars on the listener. Promising to visit you in your nightmares much further down the road.
Drop some serious cash on this one. If not for the music or the fact that your contributing to a more than worthy cause. Do it for the simple fact that the cover art depicts God's greatest creation.
James Damion

The end of everything Buy it Here
Posted by James Damion at 6:38 PM