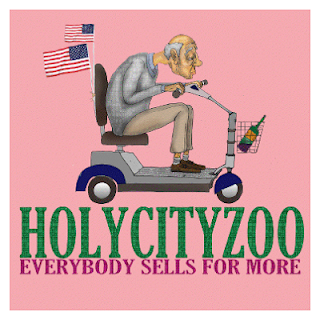 New Brunswick, NJ maniacs Holly City Zoo follow up their 2012 EP "Nobody Sells for Less" with the aptly titles "Everybody Sells for More"

The EP offers six songs (two of them instrumentals) of absolute dissonance. Songs like
"Givin' Him the Business" "Karmatosed" and the instrumental
"That Was Mos Def
(not a pinch of salt)" offer some of the best 90's inspired Punk/Screamo power and aggression. Often giving the listener a front row view of what it's like to be inside a schizophrenic's head.
However, it's on "Hello, I'm Awful", by far the most cohesive track, when the band shows it's true ability to grow and mature as both a unit and individually as musicians.
I'd personally like to see more of that in the future.
This is my favorite release by the band to date. Though I really enjoyed the record.
It was the fact that I was finally able to connect the dots on why I like these guys so much. It further made me see what I feel they're capable of. My best description of Holy City Zoo would be "What if Rye Coalition and the Foo Fighters had an unhinged punk rock love child on their 2006 European Tour?" These six songs are available for download and cassette. Maybe if we wait long enough they'll put it on wax.
James Damion

Everybody Sells For More Get it Here
Posted by James Damion at 3:32 PM