Gameday Regulars - Nobody Likes A Quitter 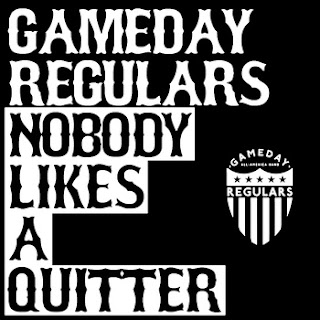 I first caught Gameday Regulars back in February of 2012 when they played with Man on Fire and Brick + Mortar over in nearby Jersey City.
At the time the band really stood out. However, as the year progressed I never really heard much from or about the band.
I chalked it up to them being just another band passing through the area while on tour. Fast forward and almost a year later their latest EP "Nobody Likes a Quitter" fall in my lap. To my surprise, Gameday Regulars were from nearby Bronx, New York and not some working class part of Boston or Chicago, like I had thought.

On "Nobody Likes A Quitter" the band deliver four memorable songs of straight forward working class Pub Rock that feature warm but driving guitar sound and gravely vocals delivered by singer/songwriter/guitarist Gino Romero. There's a live and in your face vibe about these four songs that bring it all to another level. I couldn't help feel as if I was inches away with beer in hand, drunkenly cheering and singing along with every note. Rounding our the band respectively is brother Will Romero (Bass) and John Ryan Clifford (Drums) respectively on drums and bass. While the band may draw instant comparison to acts such as Gaslight Anthem, Dropkick Murphy's, The Menzingers and even Hot Water Music.
Gameday Regulars and each of the four songs offered on "Nobody Likes A Quitter" deliver more than their share of raw energy and authenticity. Here is an EP and a band more than worthy of clinging onto.
James Damion

Get it Here  Bandcamp
Posted by James Damion at 4:57 PM