Clear For Takeoff - Line of Fire 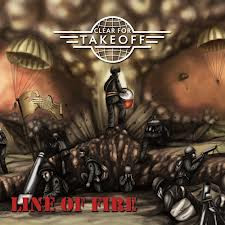 What they say: "With the release of their sophomore album “Line Of Fire” recorded by platinum-selling producer Rob Freeman (Gym Class Heroes, Cobra Starship,
Hit The Lights),
Clear For Takeoff have been blasting the East Coast with their distinctive brand of punk-inspired vocal rock. Aiming for the lyrical prowess of Queen and The Beatles while maintaining the all out rock and roll mindset of Foo Fighters and Green Day. Clear For Takeoff have a refreshingly honest approach to their songwriting and live performances.
“Throw down your arms and make music” – the authenticity of the band’s message prevails, on stage and off!

What this listener says: This is the kind of Corporate Rock shit the industry has been spoon feeding the public for decades. "Line of Fire" serves as a reminder of just how sad and desperate the music industry has become with their signings and marketing campaigns.
I have no idea where the bands "Punk inspired" sound or influences come from.
I would imagine they got it from listening to a lot of Richard Marx and Bryan Adams records. The mere mention of acts like the Beatles, Queen and Foo Fighters is enough to get their PR man sued for liable if not prove that he was as high as a fucking kite when he wrote the bands bio. Each of the songs sounds like it was written to be featured in a future douching or viagra ad. The EP opens with an ode to their listeners in "No More Hate Mail". An upbeat, syrupy track that could draw close comparison to any upbeat, syrupy track that New Found Glory ever wrote. From there it's just five more radio friendly Taco Bell, Pizza Hut,
Birth Control jingles that make the listener want to vomit. If I were to leave you with anything positive about Clear For Takeoff and their second release. It's that they can play their instruments well and create some pleasing harmonies. If you're a parent of a pre-teen/tween and you want to have him or her listening to a radio safe alternative to Justin Beiber or
One Direction; This might be a safe bet. The band is playing Cheeseburger in Paradise in Pasadena MD on January 2nd if you'd like to catch them. James Damion

Band Site
Posted by James Damion at 12:55 AM