Cicada Radio - No Fate But What We Make 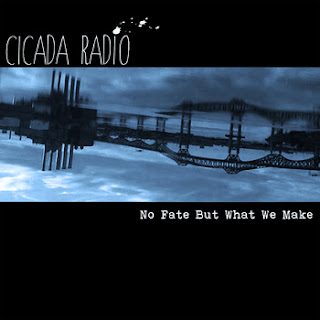 Cicada Radio has been a favorite band of UBRS since we first laid our ears on their excellent debut ep "Imposter" back in the early summer of 2011. The "Imposter" EP was full of emotional heaviness and hooks that were firmly planted in the 90's Emo sound that reminded this listener of  bands like Karate, Knapsack and Small Brown Bike.

On the new album "No Fate But What We Make" the band has moved away from the Emo tendencies heard on "Imposter" and seem to have infused a bit of a shoegaze feel to their guitar tones. There's also an openness and clarity to their sound that was honestly off putting upon initial listen. I initially struggled with this album quite a bit. I was confused by the vocals that sound like they are being shouted across an empty concert hall and the overall production approach of the album had me confused. Therefore,  I decided to put this record aside to possibly revisit another day. The strange thing is that over the next few days I would catch myself with the melody to one of their songs stuck in my head. At first it was "Charity Mafia" and then it was "Oceans" so I decided that I better give this album another chance and I am really happy that I did. "No Fate But What We Make" showcases a band that is maturing right in front of our eyes and I now appreciate the way they approached this album.

I now believe the production of the record and the things I struggled with at first were absolutely intentional on the bands part. I like the fact that I had to really listen to understand and to gain an appreciation of their developing sound. Sometimes the best albums are the ones that don't immediately grab you, but the ones that plant a seed in your brain upon initial listen and then keep dragging you back for more. Even when you aren't sure why you keep listening... Until one day you realize that you can't stop listening....I present to you "No Fate But What We Make"...Dave G.