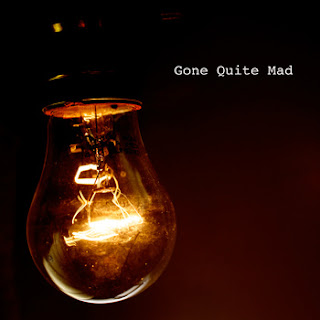 Back in late 2011 I was introduced to the band
Blue Chip Village through a collective known as
Tiny Giants. My first impressions of the band were mixed. It was a lot different from what I was listening to at the time and very different from a lot of the music we had featured on the blog. It was that difference that made them stand out for me and made me like them. After seeing them perform live a few times my curiosity and interest in the band wained considerably.
I just found myself twiddling my thumbs, waiting for something to happen.

Enter Gone Quite Mad, the newly formed version of that band. Their first EP follows the same path as Blue Chip Village's 2011 release with it's laid back, jazzy and dramatic eccentricities. Only this time around, the bands style has more of a drunken effect on these ears.

Though there are many moments where I find myself thoroughly swept up in the musicianship of the band; (The bass on "Team" and the guitar on "Drunk" immediately come to mind.) It's Gesualdi's vocal style that drives a stake through it. Often reminding me of those moments where every Diva or "American Idol"contestant holds onto that high note just long enough to remind you that, "When I take a shit; I shit gold bricks."
Gone Quite Mad come off sounding very professional, well groomed and produced on these eight tracks. Not a wrinkle in sight or a hair out of place. However, for me personally, I can respect the musicianship without actually liking the music.

Just as I found Blue Chip Village's 2011 EP to be very promising, (Review) even going as far as comparing them to a jazzier Shudder to Think. Time and further exposure to the band has left me bored and indifferent. Gone Quite Mad maintain the same personnel, sound as Blue Chip Village with a more appealing name. If you were a fan of them then, you will not be disappointed in the least. With Gone Quite Mad you're getting everything you loved with Blue Chip Village. Nothing more, nothing less.
James Damion