Sick of it All - Non Stop 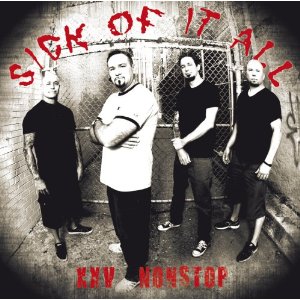 As with any of Sick of it All's prior releases I met the news of a new record with a level of excitement reserved for few other bands. Having been a Hardcore fanatic since my early teens I followed the band from their very first demo to their first 7 inch and everything that followed. As much as I love many of the NYHC bands from that particular era, Sick of it All are in my mind both the ambassadors and kings of NYHC.

Just as my excitement reached the highest peaks, those feelings quickly faded when I heard the band was re-recording old classics as opposed to delivering new ones. The reworking, re-imagining classic tracks had me thinking of horrible choices that unlistenable bands like Asia and Emerson, Lake and Palmer would undertake. I debated for weeks as to whether or not to take the plunge, ultimately coming to the conclusion "It's Sick of it All." "There's no way they can mess this up."

"Non Stop" opens up with an updated version of "Clobbering Time" which welcomes back legendary rapper KRS-1 with his newly classic intro "Fresh for 2012 you bitches." Once Craig's Bass line introduces Lou's vicious growl "It's Clobberin' Time" even the most cynical ears are won over. The band rips through all the classics including "Clobberin' Time", "Injustice System", "US VS. Them", "World Full of Hate", "Pushed Too Far", "GI Joe Headstomp" and many other classics. All of the twenty-one songs featured are worth mention. Lou's vocals are venomous. Pete's guitar work adds chainsaw like results while Craig and Armand 's rhythms rage like dueling jackhammers.   I really felt a certain raw, live quality to this. It was as if the band were sitting with me in my living room, up close and in your face. Sick of it all haven't only updated these songs, they've thoroughly upgraded them. "Non Stop" closes with a spoken word by KRS-1 that will definitely have you thinking. Though I will always favor the original recordings I will surely check in with "Nonstop's" versions frequently. Fans of the band will definitely feel rewarded. The CD version includes a bonus DVD featuring the bands 2001 Documentary "The Story So Far" which  marks the first time it has been made available in DVD format. (As I listened to this record I couldn't help but think fondly of my old friend Gina "Last Daze" Lawson. She was a die hard
Sick of it All fan from day one. She would always refer to Lou and Pete motherly as  "Her Boys". Gina, wherever you may roam I hope it's with a twelve pack and a walkman blasting "It's Clobberin' time".")
James Damion

Email ThisBlogThis!Share to TwitterShare to FacebookShare to Pinterest
Labels: New York Hardcore, Non Stop, NYHC, Review, Sick of it All