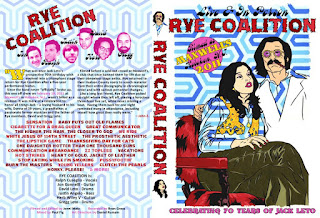 Back in January of 2010  I was already writing for Jersey Beat covering local shows, writing and above all taking lots and lots of pictures for the site.
One day I got an email from Jim asking if I'd like to cover Rye Coalitions one off reunion and 70th Birthday celebration of David and
Gregg Leto's Dad Jack.
I was already dead set on going but had once again forgotten to get tickets. Covering the show meant I didn't need to hustle for one prior to the show. "Fuck Yeah" The band hadn't played in five years but truthfully
I hadn't seen them since the 90's. That night at Maxwells was by far one of, if not the, most incredible shows I had been to in my life. Now, for the first time since we're able to experience it through more than some random memories and about a hundred or so photos.

"Live & in Person" features the entire set from that February 19th 2011 set. The footage is exceptional, capturing the energy, enthusiasm and raw intensity of the bands performance. As I watched it I felt the same chills I experienced that night. Though I have to admit it was a little more comfortable watching from home than being front center. Not having Ralph Cuseglio's sweat dripping all over my camera was a big plus. Bonus features include interviews with Maxwells booking guru Tod Abramson and a very animated Alap Momin (Dälek). There's also a trailer for the upcoming Rye documentary
"Story of the Hard Luck Five". The trailer itself is, for lack of a better description,
hair raising. If this doesn't make you wet….. I don't know what will. Whether you're a long time or casual fan of the band, this is a must….    James Damion