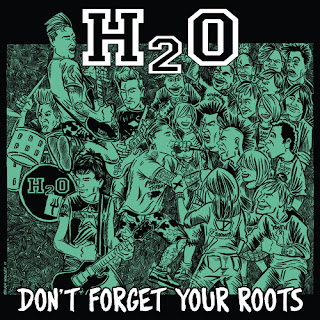 Since 1995 H20 and singer Toby Morse have been the hyperactive torchbearers for the message of "PMA", (Positive Metal Attitude) educating the world through their music and actions. Throughout their decade and a half existence they've often worn their influences on their sleeves. From early roots in the DC area to their days in New York and beyond.

On Don't Forget Your Roots" the band has decided to enter the much too often slippery slope of the "Tribute Album". When any band decides to do a "Covers" or "Tribute" album there are obviously going to be risks involved. Music's landscape, along with most record stores cut out bins, is littered with those who have tried in the past. The idea of covering a favorite song or paying tribute to the ones that inspired us to pick up an instrument and go fucking ape shit seems sincere enough. However it is not without it's pitfalls. There's the risk of completely failing to capture the original song/bands energy, quality or overall angst is a costly undertaking. While some of the most sincere bands often come off sounding like the cover band that plays at the local college every weekend.

In this particular case, H2O and to be more specific, Toby, aren't really guilty of any of these clichés but they're not exactly making a good argument as to why bands should continue this ritual. Toby really does a great job on 7 Seconds "Satyagraha" and handles
Social Distortion's "Sick Boy" with a sense of ease that is amazing. The bands homage to
Joey Ramone on "I Wanna Live" is worth both mention and praise. Though there are a few highlights, Rancid's "Journey to the End" and Sick of it All's "Friends Like You" come to mind. The problem lies in the plain simple fact that there are too many others that are either immediately forgettable or simply unbearable. The classic "Train in Vain” by the Clash is unfortunate while The Mighty Mighty Bosstones "Someday I Suppose" fails terribly with the absence of a horn section. Another problem that is quite evident throughout is that
Toby Morse simply doesn't have the vocal range for a lot of songs covered here. Though this isn't a terrible record, it is at it's very best, tolerable. "Don't Forget Your Roots" has it moments but overall fails to really reach it goals. Not bad for die-hard fans of the band but I don't think this will win them many new ones. James Damion
Buy it Here
Posted by James Damion at 6:39 PM