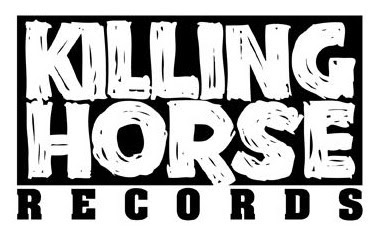 As most of you already know Killing Horse Records are good friends of ours.  They've worked with a lot of ours friends by supporting their bands, releasing their records and giving them a platform to further express themselves. The label is essential to the music we love and it has done more than its part to foster a sense of community and scene in this area. Its people like these that help us survive creatively. We highly suggest you look into the label and the bands on it. See you on the 14th.
James Damion 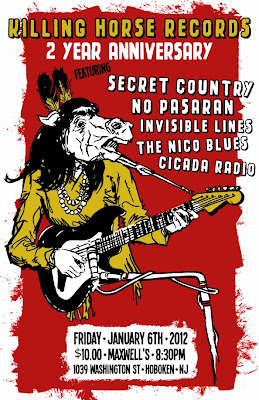 Killing Horse Records is gearing up to celebrate their two year anniversary at Maxwell’s in Hoboken, New Jersey on Friday, January 6, 2012. Killing Horse will be showcasing their current active roster which includes Secret Country, No Pasaran, Invisible Lines, The Nico Blues and Cicada Radio. The label started by Mike Sylvia and Ryan Gross, two longtime friends, out of their apartment in Kearny, NJ has been gaining momentum in its first two years of existence, and has gained quite a reputation in the New Jersey DIY music scene for having a great ear for local talent. The show will be $10 and will start at 8:30pm. Maxwell’s is located at 1039 Washington Street, in Hoboken, NJ.


Adding to the excitement of the event, The Nico Blues, Killing Horse’s newest band will be celebrating the reissue of their debut album, Blame the Boredom, Blame the Basements.  The Nico Blues have been on the bands to watch list for many New Jersey bloggers and scene reporters and as the first press of their debut effort goes out of print, Killing Horse Records will be jumping right in to help with the support of the record, adding a lyric booklet to the packaging of the record. Filling out the bill will be Cicada Radio, Invisible Lines and No Pasaran. Headlining the event will be New Jersey’s favorite outlaws, Secret Country.

Killing Horse has a huge year planned.  They will be launching their new website, and for the first time will have t-shirts, hoodies and stickers for sale. On top of all that, the boys at Killing Horse records plan on releasing 4 to 5 records in 2012. “We’ve got the year planned out and are excited to kick it off with the 2 year anniversary show at Maxwell’s” says Co-founder Mike Sylvia. The show will be $10 and will start at 8:30 pm and will be all ages. Maxwell’s is located at 1039 Washington Ave, in Hoboken, NJ.

Killing Horse Records is an independent record label based out of New Jersey; Killing Horse boasts acts such as Secret Country, No Pasaran, The Nico Blues, Invisible Lines and Cicada Radio. For more information on Killing Horse, please go to
www.killinghorserecords.com
Posted by James Damion at 4:02 PM