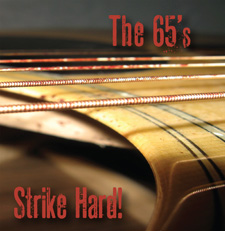 On the night prior to the release of the bands debut record "Strike Hard" I sat with 3/4's of the 65's over coffee and other unknown liquid refreshments to talk about the release. Having been treated to an advanced copy of the record I had listened to each and every track numerous times. So much so that it had quickly become the soundtrack to my work day. Though the interview didn't go quite as planned I felt I was able to convey my excitement about finally being able to officially share my feelings about one of my favorite releases of the year.

Featuring former members of
The Dark Brothers, Shirk Circus,
Electric Frankenstein and Balloon Squad to name just a few.
The band combines an impressive pedigree. The 65's score exceptionally high points on their debut. Mixing intelligent, highly evolved songwriting with catchy, stick to your ribs hooks, riffs and melodies. There's a real sense of maturity and ease about the songwriting that blends almost seamlessly with the rather dirty vibe of the music. Al's vocal quality has a sort of gravely cigarettes and whiskey quality to them that really add a nice dimension to the songs. Opening with the sweeping "Greatest Pretense" followed by the somewhat uplifting "Walk on Selfishly".  I found myself almost immediately hooked. While songs like
"I Will Never Serve You", "Are You Tired of Me Yet" and "Wherever You Are" put the hook in me. It was Cindi's turn on the vocals "Worse Comes To" that made me put me on an emotional respirator.  Thus placing "Strike Hard" at the top of my list for favorite releases of 20011. Top it off with a cover of The Psychedelic Furs 80's hit "Pretty in Pink" and you've got a record that will win over even the most jaded music fan. One can only hope that the future can promise more from this band. James Damion