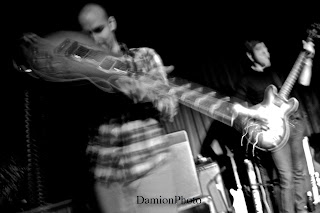 As the days drew closer to the show I recalled a September conversation with Michael and Vic of Static Radio NJ about how stoked we were about the Hot Snakes coming to Maxwell's. Here was a band that was both releasing an album and embarking on a European Tour and all they could talk about was a distant Hot Snakes show. A month passed and with all that talk I forgot to get my ticket. Did I not for see the show selling out quicker than a Justin Bieber signing at an all girls junior high?      I don't know. The thing is I completely fail when it comes to getting advanced tickets to a show. So a few days before the show I begged Jim Testa to get me on the guest list by promising pictures, a story and my first born. Surprisingly, it worked.

It wasn't until the day of the show that I realized that Rye Coalition were also on the bill. Feeling as if my stomach was performing some kind of sick voodoo ritual, I thought to myself, "Shit, I don't know if i can handle this." Knowing full well that I was being counted on I sucked it up and headed out to meet my partner in crime Dave.

As we headed in I couldn't help but feel that there were a lot of friends missing in action.   No sign of Mike or Vic along with a lot of others I expected would surely be there.  I made my way up front to find a comfortable spot to get a few pics and enjoy a close and personal vibe. Before long I spotted some familiar faces including Jenni Matz, the woman behind the epic Rye Doc "The Hard Luck Five". All was well and before we knew it Rye Coalition launched into another unforgettable set. 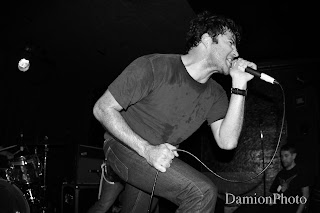 The band launched into "One Daughter Hotter than One Thousand Suns" and never once let up from there. The bands energy and passion is boundless.
This was my third time seeing them this year; second time at Maxwells.
Thus matching the amount of times I saw them during their hey day. I can honestly say there are few bands that do it as well. Each time I've seen them they've had me come away with a new perspective on how a a band can perform at a peak level while also connecting with its audience on a personal level. After the set I ran into an old friend, Dave Sien who was electrified by the bands energy. As he tried to describe the look on guitarist Jon Gonell's face throughout the set, I intervened and said, "Possessed". That would be my best description of the bands entire set. 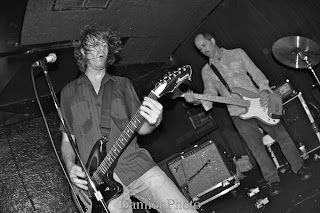 Before long it was time for Hot Snakes to take the stage.
It had been what, five years since the band was last active? Though I'd never seen them live I had all the records and was well versed when it came to their songs. As the group took stage I took a deep breath and readied myself for what I was about to witness.

The band quickly launched into "I Hate the Kids", "Gar Forgets His Insulin", "XOX" and "Who Died" from the album "Suicide Invoice".  Rick and Speedo firing away while Jsinclair and Gar kept the rhythm.
The pace was fierce to say the least. At one point I noticed my that voodoo that had been working on my stomach all day was either gone or had been reborn in my hips as I could hardly stand still. As the band closed their set the already vocal crowd demanded more. Within minutes the band launched in to an encore of around six songs. More than enough to let the band get out of Hoboken unscathed. All and all it was just another amazing night at Maxwells. Great running into so many friends and finally putting a face to face to some of my long time Facebook friends. Can't wait to do it again.
James Damion
Posted by James Damion at 5:30 PM