Walk Proud - Too Much is Never Enough

I was rifling through some boxes of 7 inch EP's at a friends house the other day when I pulled Walk Proud's Be Yourself. Quickly, the memories of how positive and in particular, straightedge Hardcore had such a major impact on my life. For better or worse, bands such as Unity, Brotherhood and Insted (To name just a few.) payed countless visits to both my turntable and tape decks. Amongst those bands were many, less than original and downright formulaic bands I gave a pass due to their positive message and mosh worthy breakdowns. 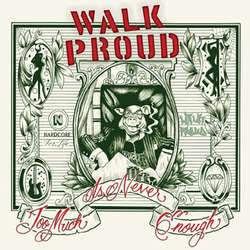 In recalling Walk Proud, I can easily trace Be Yourself as the most generic and underwhelming records I had heard to date. Years later, as much as I personally disliked it. That same record became, for many fans of mediocrity, became a classic, milestone record. Most notably, the first release on the very influential New Age Records. 1990's RIP LP and 1991's One More Time EP followed on Nemesis Records before the band called it quits and inevitably reunited for 2003's Furious World compilation on basement records.

Fast forward to 2014 and an older, angrier and if musically possible, more generic sounding Walk Proud reappear on Hardcore's 40+ landscape. With a grand total of thirteen songs.
Too Much is Never Enough proves to be thirteen song too much. While die hard fans of the band might take a liking to this. Most fans of this style of music would do better with other dinosaurs of the genre such as Agnostic Front or Suicidal Tendencies.
James Damion

Know Records  Get it Here
Posted by James Damion at 6:27 PM