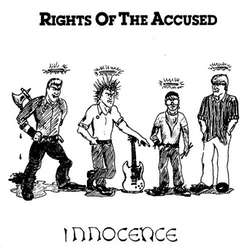 The long out of print and highly sought 7' is back on vinyl for the first time in more than you'll ever remember. While Innocence serves as the bands debut.
Rights of the Accused, known for their silly songs and high energy performances, existed in form or another for more than ten years.
With Guitarist Jay Yuenger going on to play in White Zombie.  Also worth noting is future Rights of the Accused contributor
Brian St. Claire (drummer 1988-1992) went on to form half of 90's grunge, noise duo Local H. The reissues five tracks revisit Hardcore's early punk influences with songs that are raw, intense and tribal.
A nice document of the pre crossover day of the genre and proof that Hardcore wasn't strictly a coastal thing. James Damion