If you're scratching your head as to why I'm reviewing a demo released in 1991.
Take into consideration the fact the Stand By One were just about to become the band we all came to know and love as Strife. 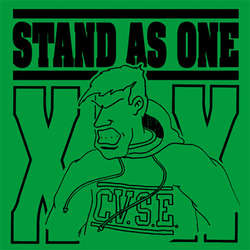 During the bands time as Stand As One,
the California Straight Edge band played with better known acts such as Infest,
Chain of Strength and Downcast before ultimately becoming Strife.
This is the first time this demo has ever been presented on vinyl and this is marketed as a one time only vinyl release. The four songs featured All from the Past, Question Mark, Move Towards and Dedication each have an introspective, positive vibe to them. Musically, it's what you'd expect from a demo.
Powerful, straightforward and anthemic songs featuring high pitched vocals that sound like a young teen looking to find his voice. While none of this was new or fresh sounding to me. I found it to be a nice document of a band in it's earliest stages. A nice document of time for sure. The record does not include a download card. So audiofile geeks beware. Available on color vinyl while copies last. James Damion

Indecision Records  Order it Here
Posted by James Damion at 9:00 AM