While not a new release by any means. Character Assassin, Circle Storms 1996 EP is available again, this time on clear vinyl, for what seems like a limited time. I first heard of  Circle Storm when California's Chain of Strength flew into La Guardia Airport, dropping their bags in the Queens, NY living room of what was known as "The SXE House." At the time,
the bands Revelation Records EP was already gaining "Classic" status with it's straightedge anthem True Till Death.

As I got to know the Chain crew personally. I struck up a conversation with Ryan Hoffman where I can swear he talked up the idea of the band Circle Storm and how the name was taken from the D.Y.S. song of the same name. 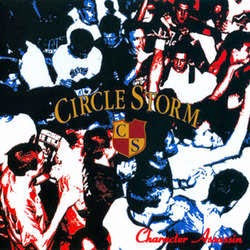 While the dates between that encounter and the actual formation of the band don't exactly crunch. My memories of the record and the short lived band are strong.
Character Assassin, originally released by Ambassador Records, a label I seem to remember as a flagship label of Revelation Records. (I could be wrong.) Members of Circle Storm featured former and future members of bands such as Justice League, Chain of Strength and Collision.
In that respect, the overall sound reflects that of it's members work both prior and post Circle Storm.

In listening to these seven tracks for the first time in decades. I gained a sense of appreciation for this oft overlooked release.
One that matched the excitement I had when first hearing the name in that long forgotten exchange with Ryan. Good material that was worth revisiting.  James Damion

RevHQ  Order it Here
Posted by James Damion at 9:32 AM