Music Made to Riot collects the very earliest recordings of Montville, NJ's Sand in the Face. Largely recorded at Boonton, NJ's Mix-O-Lydian Studios. The same studio that had already given us The Misfits "Walk Among Us". 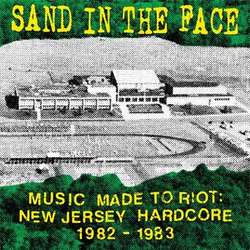 The demos within feature the pre-LP lineup of  Pete (Aaron) Wegele,
(bass, vocals) Paul Schraft (vocals, guitar)  and Mark "Munk" Lombardi, who sadly died of cancer in 2010 on drums.

I found this to be a fun and quick listen.
A good time capsule highlighting the first wave of  NJ Hardcore (Something I believe to be criminally overlooked.) Overall the tracks are what you'd expect from a young band getting to know themselves in the early days of Hardcore. A trio of high school kids getting to know their sound while working in the studio for the first time.  Snotty, mid to fast paced teenage anthems A sound akin to such contemporaries Adrenaline O.D. and Bedlam. Music Made to Riot compiles eighteen tracks in all and detailed liner notes written by Wegele himself. His dedicating the release to his departed friend and band mate is, to say the least, touching. Limited to 600 copies. My one complaint, if any, is that this did not come with a digital download. Something that would have come in handy when compiling my New Jersey Hardcore mix tape. James Damion

http://www.matwrecords.com/
Posted by James Damion at 8:44 AM