While terms such as  "Supergroup" and "Studio Project" often leave much to be desired.
The right chemistry, game plan and execution can often take a collection of talented pieces and turn a masturbatory cast of  A -Listers into a cohesive amalgamation of the talent gathered. Formed earlier in 2014 when Jonah Matranga (Far, Onelinedrawing), 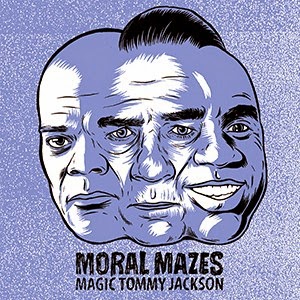 Jeff Dean (All Eyes West,
Dead Ending), Darren Zentek
(Office of Future Plans) and
J. Robbins (Jawbox,
Burning Airlines) veered their friendship towards a studio project
Though the studio collaboration only produced two songs.
"The Long Way" introduces
Moral Mazes with it's sinister vocals and tribal drumming while "Stay Unprepared" makes itself comfortable with it's winding guitar riffs. Moral Mazes put their varied influences and experience on display through a post core efficiency and familiarity  that grabs the listeners attention and keeps it while leaving a lasting impression. One that, though familiar, feels unique to them. While I've just put an order in on this record this morning. I've listened to the download continuously for the last hour or so.
Considering these two songs come in at just over 7 minutes. I'd say this more than won me over. I'm really looking forward to hearing this on the turntable. Until then. James Damion