Cinema Cinema - A Night at the Fights 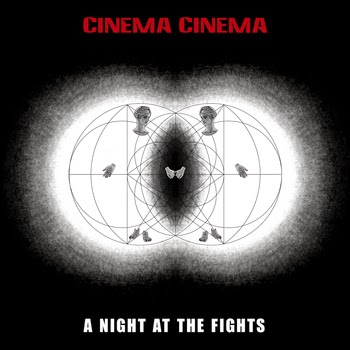 On their third album and fourth release Brooklyn's artful noise duo take the sheer madness that highlighted and even defined their sound and turn it into pure genius.
While Cinema Cinema's maniacal delivery has always been the cornerstone of their sound. It was created and fostered in a very mindful and artful manner.

There's always been a manic, somewhat sociopathic quality to Cinema Cinema. One that anyone whose experienced trauma, depression or any of the various psychiatric meltdown life's realities might bring might experience.

The album opens with "Broad Daylight". A dark as coal call to war with apocalyptic screams, tribal drums and bloodletting riffs. First time listeners be warned. You will not be eased in gently and this isn't for the teary eyed souls that grew up in a world where everybody gets a trophy or a toy to take home with their Happy Meal.

On "A Night at the Fight's", the band relies heavily on that trademark vibe while experimenting with melody, harmony and other unexplored territory not heard on prior
Don Zientara produced work. Perhaps the production work of recent Cinema Cinema cohort Martin Bis deserves due credit. And while these elements show the bands growth and abilities beyond pure noise. They don't take any of the primal elements that make this duo so unique. As you listen to "A Night At the Fights" you'll find yourself quickly immersed in the album itself. As much as each song stands on it's own. It's the album as a whole you'll find yourself drawn to.

CC's bombast and knack for noise instantly bring to mind what Amphetamine Reptile was producing early on and  what it was like to hear bands like Jesus Lizard, Helmet and even The Melvins for the very first time. Not all music was meant for the masses.
For me personally, that's a good thing. For Cinema Cinema are not the band you bring home to meet the parents. Unlike the voices in our head we often pay good money to chase away.
"A night at the fights" not only welcomes the demons. It offers them permanent residence.
As where most artists producing and performing at such intense levels often burn themselves out early. Cinema Cinema seem to grow stronger. The release is now available at a name your price. I suggest getting your ass to a show and picking up a hard copy. Either route gets it done. James Damion

Get it Here  A Night at the Fights
Posted by James Damion at 6:49 PM