Sheer Terror - Standing Up For Falling Down 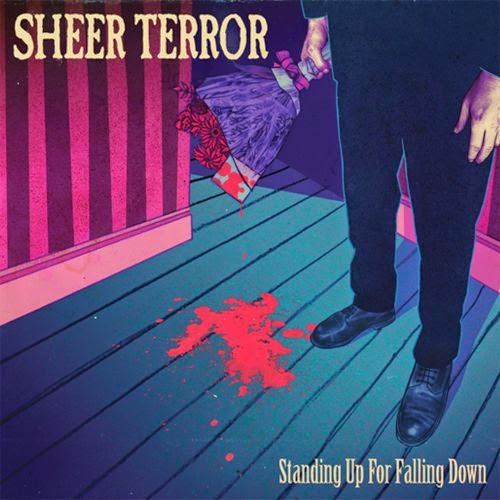 If it were not for my close friend and fellow fanzine creator
Gina "Last Daze" Lawson,
(God rest her soul while providing it with plenty of drink, cigarettes and Hardcore.)
I probably would not have ever given much attention to
Sheer Terror. The truth of the matter is, that after first hearing them on my copy of
Big City Records
"One Big Crowd" compilation.
I never gave the band much more than a casual listen.
It wasn't until 2000's
"Bulldog Edition" that I really began to appreciate the bands legacy and well deserved reputation as the bastard sons of negative Hardcore.
"Standing Up for Falling Down", the bands first full length in eighteen years might be
Sheer Terror's best work to date. It would be hard to argue against it being their most cohesive. Raw, brutal, honest and surprisingly musical. Bulldozer guitar leads, dark bass lines and tribal beats led by Hardcores greatest MC and motivational sledgehammer,
Rev. Paul Bearer.  Perhaps Sheer Terror were an acquired taste for me personally.
As I get older though. I seem to find comfort in Sheer Terror's tongue in bleeding cheek style. Unlike many of their contemporaries. Sheer Terror just get bitter with age. If you love brutal, confrontational and honest Hardcore music. You have no excuse not to invest in this record. James Damion

Reaper Records  Buy it Here
Posted by James Damion at 8:30 AM