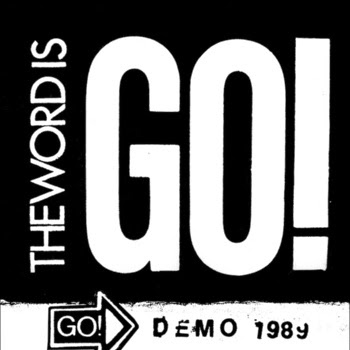 Originally released in 1989 on cassette. GO's 1989 demo finally get the vinyl treatment. Delivered in 7' format.
"The Word Is" features
fast, loud and impassioned Hardcore delivered in short, angry spurts. A blueprint that served the band and it's fan base well during their very busy existence.
The demo features each of the original twelve songs, delivered in at about twelve short minutes. Perfect for those of us with a limited attention span or any ADHD issues you might suffer.
Includes classic GO! songs "Take Root" "Me VS. You", "The Word",  "Section 28",  a noteworthy cover of Orchestral Maneuvers in the Dark's "Electricity" and "Breakdown", a ballsier East Coast rebuttal to the Uniform Choice shit storm "Silenced". GO! marked Mike Bullshit's departure from SFA and came during a time when NYHC was suffering from somewhat of an identity crisis. It also coincided a healthy shift from the often violent mood that had taken over the scene at CBGB's to the more healthy, proactive environment at Rivington St.'s ABC No Rio. Overall, a nice document of that time that brought many good memories and sing a longs. James Damion