"A Ballad From Hell", "How To Rob a Bank" and More with Those Mockingbirds Tory Anne Daines

With a couple of new singles, a tour behind them and a debut full length on the horizon,
I decided to reach out to Those Mockingbirds violinist / keyboardist Tory Anne Daines
to get the scoop on the band, the music and how the year's been treating her.

James: You just finished a short tour. Where did it take you? Did you head out alone?

Tory: We took ourselves out for a tour of New England and surrounding areas, which subsequently turned into a farewell tour for our guitarist Jon Gianino. 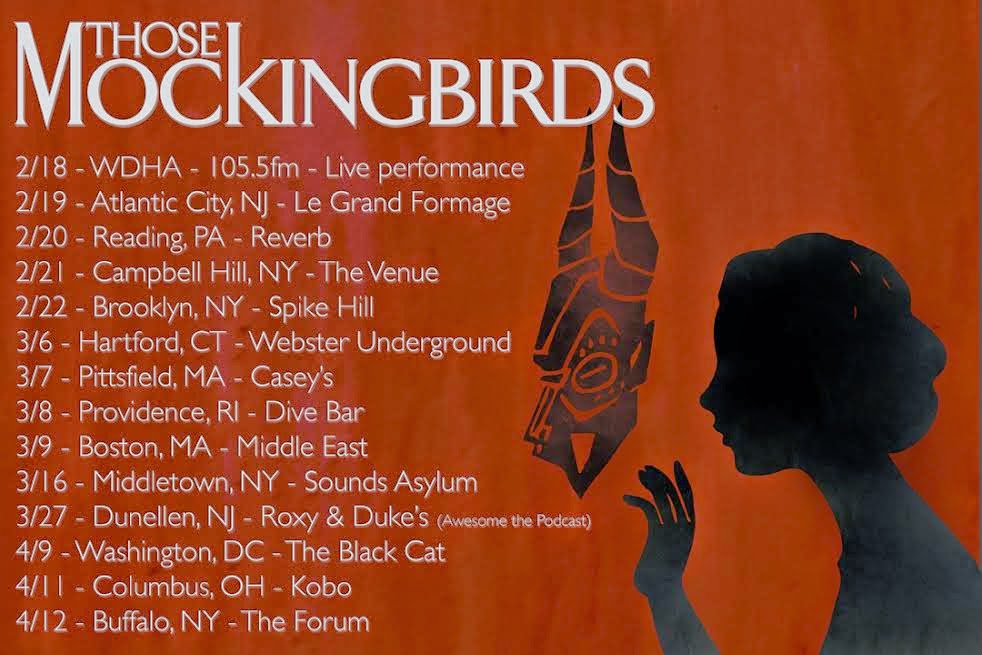 We kicked it off at WDHA with an interview by the fantastic
DJ Lindsay Klein
and ended in our hometown of Montclair NJ.
The road from start to finish was eventful for sure. We played, gambled, and encountered everything from ribbon dancers to goats to sugar gliders to frat guys so drunk all they could do was roll on the ground and ask for ‘Kishes' (Kisses). We lost Jon but we gained a fantastic new guitarist, that we’re set to perform our first show with Saturday March 3rd at Mexicali Live in Teaneck with Trophy Scars.

James: Was Jon’s departure sudden, unexpected? Is there now a contract out on his life?

Tory: No contract but Jon left to pursue other avenues of his life. He told us about halfway through the last tour he was out but he played out the remaining dates with us.
We even made a farewell show for him out of the last show on the run. It's sad but we're all excited for what Kyle is bringing to our writing style.

James: You got sick just days before the tour. How did that turn out? Did it affect you overall performance?

Tory: I got sick far enough out that I was better by the first date but I was still only halfway through the antibiotics so I had to watch my drinking because beer would affect me much differently. I’m glad I caught it when I did because it could have easily affected my singing.

James: The videos you've produced in the past have been impressive to say the very least. While "How to Rob a Bank" showed off the bands sense of humor and ability to make fun of itself. "A Ballad from Hell" exhibited a darker, more sinister side to the bands personality. Can you fill us in on what went into the planning and execution of both?


Tory: Both videos were well thought out, but only one of them was intended for release.

Our video for “A Ballad From Hell” was initially shot as a music video for “Coast to Coast” that was never released. We didn’t want to simply scrap it so we made it into something just for us, leaving behind the initial plot we shot the video around. I’m going to keep that plot private because it’s interesting to see how this video has taken on a life of it’s own.

With “How to Rob a Bank” we wanted to tell a complete story, beginning, middle, and end.
It wasn’t just us doing everything though we needed someone to help us flesh it out, film it, edit it, and tell us if something wasn’t working; John Komar couldn’t have been a better to work with on that.

We also released a video for “Destroy My Love” that we filmed in a warehouse.
The song is actually the first song Those Mockingbirds ever wrote.

James: You also ran a successful campaign to get "How to Rob a Bank" on MTVU.
In all honesty, I had no idea MTV still provided a platform for music.
How did that opportunity come about?

Magic and a whole lot of fan support. We were up against some serious competition for the spot, including some bands we really liked prior to going into this like Red Fang, and
Steven Wilson. The Freshman competition was the first time I really felt the weight of our fans. They were the ones that tilted the scales for us.

James: Your EP "Fa Sol La" was released by "Star Beat". Are you working with any labels at the moment? When can we expect to see the album?

Tory: We are not working with any labels at the moment but we’re working hard to introduce this album to the world in the right way. We’ve already given away a few secrets, including the fact that cellist Daniel de Jesús from Rasputina guests.

James: "Coast to Coast" had been my go to song for so long, my wife threatened a cease and desist order to keep me from repeatedly singing the chorus.
Is there a song on the new album worthy of taking it's place? What are your favorites?

Tory: There is definitely more than one you’ll like. “Penny The Dreadful” is a different beast from “Fa Sol La” and also one that translates very well live. If you don’t walk out of one of our shows with a new favorite song I’ll sic some ferrets on you.


James: I think it's safe to say, you've had a trying year.

Tory: Oh yeah definitely instrument problems. With the exception of my five string electric, I've been playing on the same instruments for more than fifteen years. The glue dried up on the fingerboards of two of my acoustics and in one great act of defiance they just fell off. The big plus out of this year, were all the Helicore strings D'Addario thrown my way.
I've been making great use of them.

Instrument debacles aside this year has been full of so many highs and lows as a band.
I feel good about it though because most of this year was full of highs. We recorded our first full length album, won mtvU's "The Freshmen" because of our incredible fans, and did quite a bit of touring. We got a new van with working heat & A/C and in the same respect a new practice space with a window and working A/C. It's the small things.

As for personal problems, my cars comes to mind. Back in June, a man with dementia took his family's car out for a spin, only to total my parked car. Ever since then I've been trying to buy a working car. However, the universe had other plans. Including neighbors totaling my next newly fixed parked car and four months of loaner cars. When I sat "loaner cars",
it just highlights the fact that no one seems to be able to sell me one that actually works.
I'm glad to have been mobile and I did get to drive some sweet rides through all this. Including a brand new jet black Dodge Challenger. I recall thinking "Really, you're gonna let me drive this thing?" "That's how it is?" "You know, I do know how much this costs."

Those Mockingbirds will be performing this Saturday, May 3rd at Mexicali Live with
Trophy Scars, Science and NettyRose. For tickets, go Here

You can find out more about Those Mockingbirds below.
Band Site
Bandcamp
Facebook

Email ThisBlogThis!Share to TwitterShare to FacebookShare to Pinterest
Labels: "A Ballad From Hell", "How to Rob a Bank", Interview, MTV, MTVU, Those Mockingbirds, Tory Anne Daines, Trophy Scars, WDHA