An Interview with Raleigh NC's Static is a City

With a 7' EP on it's way from the pressing plant and a number of shows neatly tucked under their belts I reached out to Raleigh, NC's Static is a City to learn more about the past, present and future of a band whose momentum seems to grow by the day. Thanks to Chris for taking the time to answer my questions.

James: Most people reading this may or may not know the band consists of former members of Dahlia Seed and Milemarker. Can you tell me how you guys met and what made you decide to start a band? 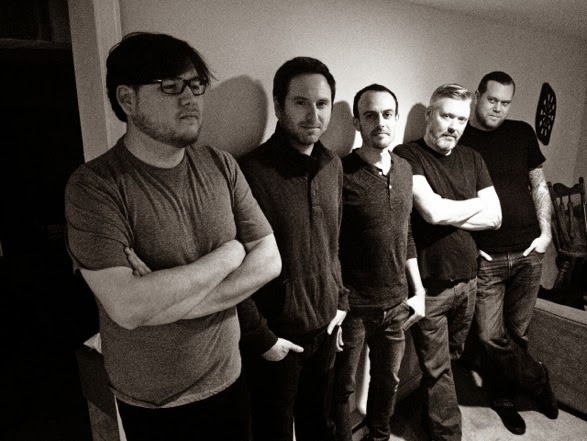 Chris: Sean ( Milemarker ) and I met several years ago through a Craigslist ad. Both of us have similar tastes in music, and we're both looking for a similar situation in which to make music. After a few false starts due to not finding the right people to play in the band, we solidified the line up  in June of 2013, and have been moving forward ever since.
As far as why we wanted to start a band?.....it's a passion that never goes away. I am not speaking for Sean here, but I believe we feel the same way in that making music is intrinsically in our DNA, and no matter the circumstance, or time, or location.....we will both always move towards creating music because it's the singular passion in our lives.

James: How quickly did things gel for you?

Chris: This current line up gelled immediately...that's how we knew we had the right people in the band to move forward. We started writing in the first "jam" we had, and by the third practice it was decided that this was the band. Rob ( Guitar ), Todd ( Guitar ) and
Channing ( Bass ) were the exact musicians both Sean and I had been looking for, and each of them bring a unique talent and creativity to our sound.

James: The bands name reminds me of how toxic city life feels for me these days.
What does the name mean to you? What does it suggest?

Chris: That's an interesting take on the name of our band James, and one I don't disagree with at all. The story of the band's name is rather average....we were throwing possible band names around and we couldn't all decide on which one we liked best, but we sort of settled on the name Red Static, but then we found out that there was a band from England that had that name already. At the same time....I had just watched a crime noir movie from the 60's called "Hell Is A City"...and I really liked that title, but hated the word "Hell" as it tends to conjure images of a metal band. I mentioned this same idea in practice one night, and we decided to merge the names and came up with Static Is A City. Unconsciously...the name does tap into a rather anti-modern theme of technology becoming a monolithic entity, but we certainly didn't plan it that way.

James: You released a self titled EP  before you even began playing out.
What was it about these particular songs that ....

Chris: Well.....those are the first three songs we wrote together, and we just wanted to have some recorded material to share with friends and such. The recordings came out way better than we had all expected, so we decided to put them out.

James: How did the label "Ideas" come into the picture?

Chris: Sean had a small label back in the 90's that had put out some local NC punk and hardcore bands, and he had been thinking about starting a label again. We had these 3 songs that we had just recorded, and Sean saw this as an opportunity to launch his label. He got things up and running rather quickly, and we had our EP released in early March. 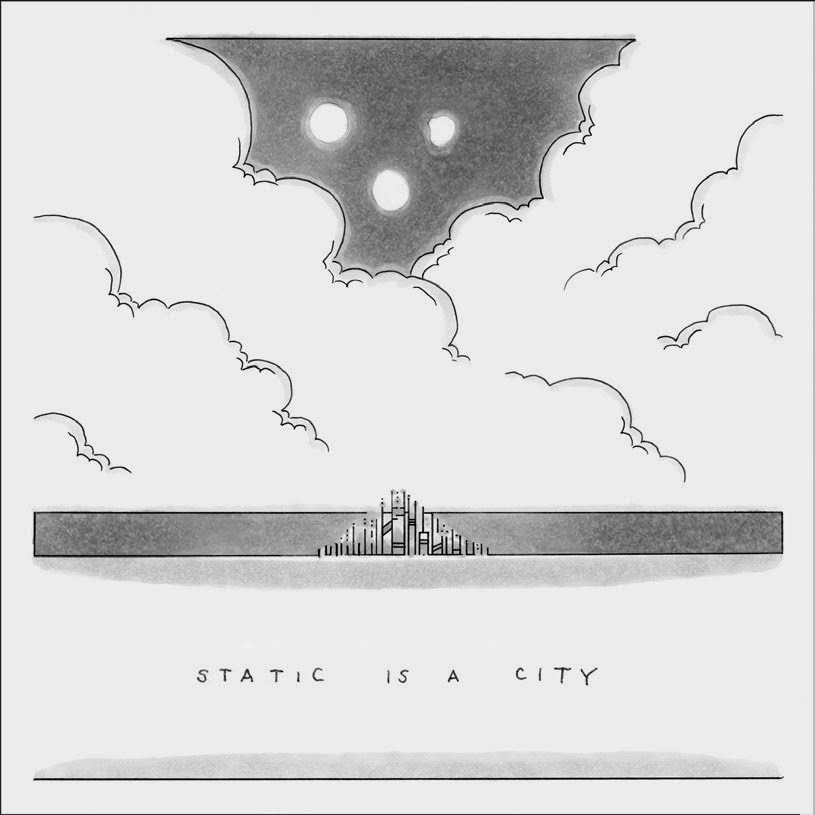 Chris: Goddamn Record Store Day held up the pressing.....haha. Ugh, the pressing plant was swamped with orders for RSD and unfortunately we fell to the bottom of the list. We just received the test pressings last week, so you'll see the record in the next few weeks.

James: Is having a hard copy document of your music, such as vinyl, important to you as a band? As opposed to offering the EP on Bandcamp or the many digital options made for bands these days?

Chris: I think having your music available in all formats is important. People lately seem to get hung up on the medium, and not the message. At the end of the day....it's the music that you want to hear, and frankly I couldn't care less what format it comes on? To someone sitting in let's say....Borneo, who only has an internet connection, and knows nothing of the hipster vinyl fetishism that is currently occurring in the Western World...finding the
"Static Is A City EP" on Bandcamp is awesome, it's the only avenue for them to hear our music. To limit people's exposure to your music, just to satisfy a current trend such as vinyl fetishism is ignorant and selfish....but that is just my opinion.

James: I know you've been involved with many bands and projects since the 80's, but this is the first time I recall you signing? What made you want to take on that role?

Chris: Actually, the first sort of functional band I was in was a hardcore / thrash band in the 80's called Selective Outrage, and I sang in that band, so singing in Static sort of feels like coming full circle after 20 plus years of playing guitar in bands. The reason I chose to sing in Static was pretty simple....Sean and I had an idea of what we wanted the band aesthetic to be, and in the simplest terms....it's hard to convey your own personal aesthetic to a random vocalist, and it is not really fair to that vocalists own creative expression to have them do what you think they should do.....so, to avoid all that mess, I just decided to sing.
Guitarists are frankly a dime a dozen.....you could open your window, throw a rock and hit a guitarist, but finding someone who can lyrically and expressively deliver a shared aesthetic is a bit tougher, so I opted out of guitar and picked up the mic. 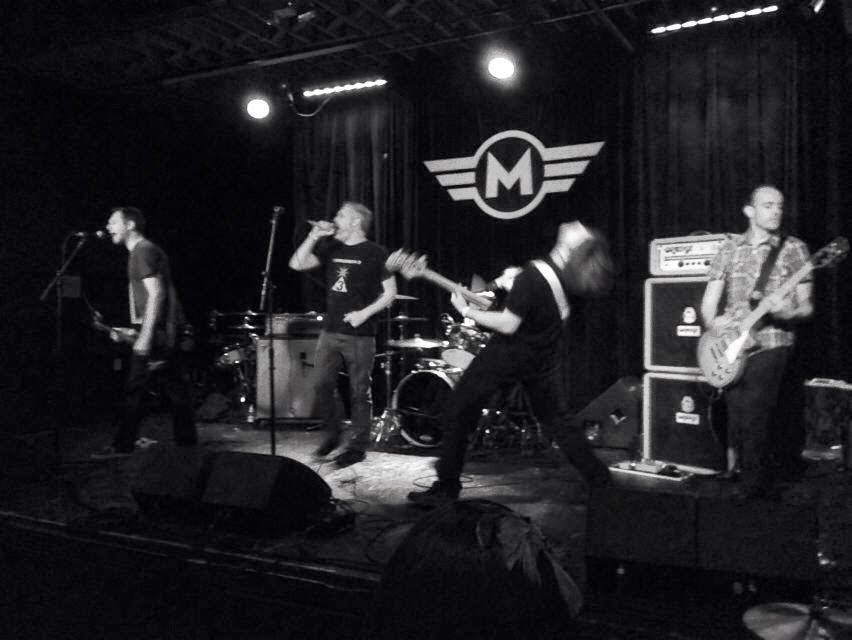 James: You've already began to rack up shows in and around the Raleigh area. Are there any plans to make it back up to the New York, New Jersey area?

Chris: We would love to come up to NYC / NJ to play some shows. Admittedly....after being in Raleigh for close to 8 years now, I am out of the loop as to where to play, and who to contact for shows in NY / NJ anymore...so hopefully we can hook up with some friends bands for our first shows in the area.

James: What does Raleigh offer for upcoming bands. Though I hate to use the term,
What's the music scene like at the moment?

Chris: Raleigh is an amazing city, with a fantastic local music scene. The thing that is most apparent in Raleigh is the sense of true community within the local music scene. Bills are diverse, and clubs are super supportive of local bands....almost every out of town, headliner show in Raleigh / Durham / Chapel Hill always features one or two local support bands. There is a very thriving hardcore / punk scene with several shows a week at a variety of venues, but the indie scene is pretty big as well, and I am beginning to notice a lot more weird / experimental bands popping up which is in keeping with Raleigh's past of being a hot bed of off kilter sounding bands.

James: You recently played a show with Richmond's Positive No. A band that features your former Dahlia Seed bandmate TKW. What was that experience like?

Chris: The show was great, and Tracy's band was terrific. I referenced the idea of "coming full circle" earlier, and in the truest sense...the show had that feel and appeal. The guy who booked the show Chris DeFusco, who runs the local Negative Fun record label was a huge Dahlia Seed fan back in the day, and he was super excited to have both of our new bands on the same bill.

James: How long had it been since you crossed paths?

Chris: I don't see Tracy as much as I would like to, but we do cross paths at least once every year and half or so. The last time we did ( before the show ) was when she came to Raleigh for the Archers Of Loaf reunion show in 2012.