As I headed to the bar to order a drink. The guy next to me looks over and says,
"Hey, didn't I meet you at that show the other night?" Somewhat confused, I took a moment to do the math before replying "You're going to have to be more specific."
"I've been to four in the last five days." At the moment, I became fully aware of how much I had been going out lately and how the late night, early mornings had begun to take their toll on me. Turns out the enquiring mind was none of than Fid from the band Pity Party.
Me and Fid met just a few nights before at the Knitting Factory. Shortly before that show we bonded over our love of vinyl records and our favorite record stores. 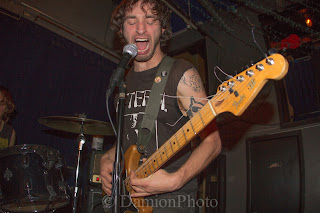 Greenville, South Carolina's Rubrics got things started on a frantic note. This was my first exposure to the touring band. They always say, "Don't judge a book by the cover."
But if lead singer/guitarists "Fifteen"shirt wasn't a clue of what was to come. I don't know what was.
There were a few stop, start moments where the singer guitarist would go into a
1, 2, 3... 1, 2, 3... miss-launch that had the feel of a North Korean missile launch. He had the super hyper personalty that made it feel like he was running a few blocks ahead of his band on the way to the candy store. At times, it felt like a show within the show or an after school special about the kid who takes meth to get that extra edge for the SAT's. It all worked out in the end as the trio ripped through a set of fast, raw punk with a socio-political edge. Though that style of preachy, unoriginal copy and paste lost my interest years ago when "Save the Children" and "Greenpeace" began setting traps on the streets of Hoboken. The Rubrics seemed to deliver a more focused and simple message in tune with my basic beliefs. "Respect yourself and others." "Don't be a Douche bag." Keep it simple, rock out, have fun. Mission Accomplished!
Rubrics  Facebook 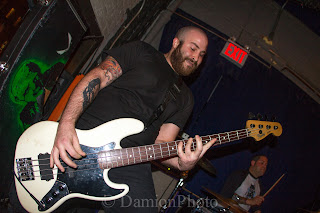 I was really stoked to see the Feral Babies return to the area. They've been a steady presence on the blog since day one, being featured in record reviews, a show review and an interview. Getting to finally see them perform live within the cramped, yet intimate space of Brooklyn's Stolen Sleeves Collective was enough to file papers to have the Tampa Band become official citizens of our tristate area. On this night they played what seemed like an all too short set. The bands fast, aggressive sound finds inspiration in a lot of the straight up Hardcore acts of the 80's with a little more musical punch. Justin Arnold attacks each song with a noticeable passion and energy. Pacing the stage like a caged lion often growling towards the ceiling. A great set but like I said before. It all went by so fast. At this point, one can only hope it won't be an entire year before they return.
Feral Babies  Facebook 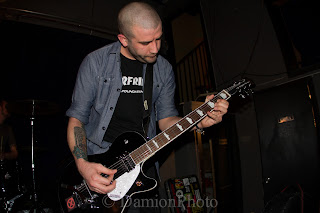 Initially, I didn't really know what to think about the next band. Young Ladies (they're actually not so young men)
At first they sounded like just about every other nondescript bar band. Good Rock and Roll with Hard Rock edge. But nothing that would make them particularly stand out. These locals feature Pat Schramm of The Latterman / Bridge and Tunnel and Ryan Seagrist (Discount / Monikers)
I remember seeing
Bridge and Tunnel on Record Store Day a year or two back. At the time I remember thinking the same thing. "Good band but nothing I'd write home about."
Young Ladies  Bandcamp 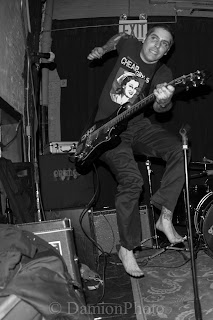 Headlining the intimate gathering were Brooklyn's Pity Party. Now, the only exposure I had to this band prior to tonight was the little Fid, the bands guitarist, had relayed to me a few nights before at the Knitting Factory. For whatever reason, perhaps the feeling they weren't completely foreign to me. I was somewhat excited to see them. In a sense, Pity Party's performance almost mirrored that of The Unlovables (The band I saw a few nights before at the Knitting Factory.)
An energetic female singer (Cassady) who spent the entire set on the dance floor engaging the crowd with songs that perfectly conveyed bratty pop punk angst with a sense of inner strength. The only notable difference was that the band itself looked and played like they could be headlining a local Hardcore show. With guitarist Fid often launching in the air as if was the second coming of Youth of Today's Porcell. Add to that bassist Joel who mirrored a younger Matt Warnke (BOLD). The band also features local legend Mikey Erg on drums. Add that to your checklist and you've got everything you really need.
Pity Party Facebook

I really enjoyed my first trip to LuLu's. The place has great drinks, good prices and free personal pan pizza. (Believe it) The bartenders are laid back and despite it being a really nice place. It still manages to maintain the vibe of a good dive bar. There are lofts on either side of the bar with seating and a vintage Galaga video game. There's also a pool table on the way to the stage in the back. All of that nestled in the deep of Greenpoint Brooklyn. How can you go wrong? James Damion