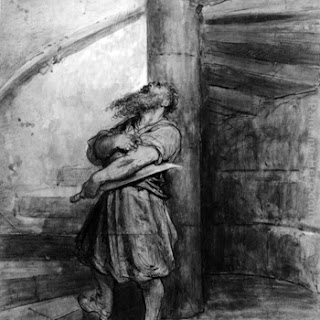 Having been blessed with a very short attention span.
I'm more than equipped to handle single and shorts bursts of energy, creativity and pure power. So when some old friends asked me if I would share my thoughts and a few words on a recent burst of fury.... Let's just say, I was up for the task.

F.T.H. features three quarters of the band My Rifle.
With Hobi Klapuri being the only absentee on this track.
And though one can't help but draw comparisons to My Rifle. "Bluebeard" takes on an even darker, heavier approach. Driving guitars and pounding rhythms compliment dark, heavy and powerful vocals.
Unlike a lot of the heavier stuff I'm hearing these days, these guys don't rush through things. The mid paced "Bluebeard" decides to stick around a while. Coming in at 5:26, it does a good job of leaving a lasting impression.

Though the future of My Rifle remains questionable. The pieces assembled for this particular track really deliver. "Bluebeard" was recorded and mixed by Andy Guida at Six III studio in Forest Hills, Queens. It features Lewis Dimmick on bass and guitar. Andy Guida on drums and Jason O'Toole on vocals. James Damion