Making a Case for the Violin with Tory Anne Daines

It was a year ago September when I first saw Those Mockingbirds perform at the Brick City Riot Festival in Newark, New Jersey. I was covering the three day event for Jersey Beat and experiencing many of the bands for the very first time. I recall standing in front of the stage. My energy sapped from hours and days on my feet and running between floors to catch the bands performing on two separate stages. As I stood there, Roz Smith of the
Aquarian Weekly, a woman I had just met hours before leaned forward and said,
"You're going to need to wake up for this." "Those Mockingbirds are really something else."
I learned two important things that night that have served me well since. 1. Roz Smith has very good taste in music. 2. A band can still kick some serious ass with a full time violinist in the mix. Since that night I've seen those Mockingbirds perform numerous times, had their record in heavy rotation and had a sit down with the bands lead singer. Still, Tori remained a point of interest. So one day recently, I reached out to the bands violinist/keyboardist to find out a little more about her background, influences and just what makes her tick.
Here's what she had to share. James Damion

James: Give me a little background on your involvement in music and how you became one of Those Mockingbirds. 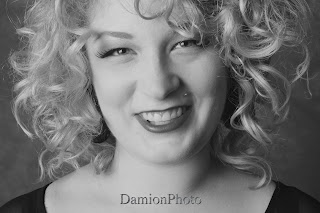 Tory: I joined Those Mockingbirds back in 2009.
Our frontman Adam Bird called me up and asked if I could play keys, I said yes and showed up with a keyboard AND a violin. That's what I play in the band now. I initially didn't sing for this band either, in fact I wouldn't even get in front of a mic.
This is the first band I've ever sung in.

James: Most kids I've come across think it's their worst nightmare when their parents give them a violin to learn.
What led you to pick up the instrument?

Tory: My mother was an opera singer and because of that I didn't want to sing but instead play the violin, I guess I was a spiteful child. I chose the violin because I thought they were the coolest instruments played in the pit orchestras at the opera rehearsals I frequently had to sit through. When I was 3 I decided that I HAD to play that instrument and convinced my family I was ready for lessons. I was so excited I can remember my first lessons clearly, where I marched around the music studio proudly screeching out the note A, over and over.

James: What was the hardest part about learning the violin and how would you compare it to learning other string instruments?

Tory: Any fretless instrument is more difficult to pick up initially than a tempered one like a piano or guitar. Much of playing the violin is muscle memory, muscle memory you use to place your fingers on the fingerboard so they're in tune. It's called memory for a reason too- you really just have to play those scales and etudes to the point where it's automatic, and that will take years. When you learn to play the instrument in tune you can begin to manipulate the sound, like you would with your singing voice , by adding in vibrato, dynamics, and phrasing. When you get to that level you REALLY fall in love with the instrument, but getting there does take a lot of patience. 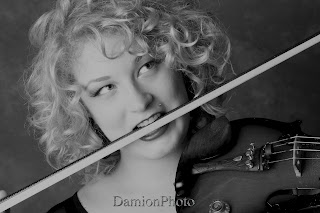 James: Did you have any specific artists, classical or modern, that influenced you or moved you enough to want to master it?

Tory: My mother and my Godfather, Michael Sylvester, really inspired me from the
get-go because they had already mastered their craft.
My Godfather used to sing the tenor roles at The MET in NYC, so when my family went to sit in on his dress rehearsals I used to sit and watch the violins in the pit orchestra.
Seeing good music on such a grandiose stage would inspire anyone. The bands that initially inspired me to play rock are the classics. Zeppelin, Fleetwood Mac, Bowie,... basically all those bands you need to play loud on your stereo to work through High School hormones.
It wasn't until college I really started listening to new bands.

James: Would you say you have a certain style or approach to the violin that others might not have?

Tory: When I was learning to play the violin I spent a lot more time shaping my sound than I spent learning technical pieces. If you listen to a lot of very good players, they'll hammer out some really fast pieces well but if you ask them to play a simple melody it will sound dry. I'm not trying to knock those players, it's really all in how you approach the instrument.
The fact that I can play a simple melody well and play technically sets me apart from many players, also the fact that I play in a rock band and use effects- but that's a given. As far as style goes, I'm a classical player with some Spanish influences.

James: You went from a student to a teacher. What was that like? I can't begin to imagine how rewarding it would be.

Tory: It's weird for sure... you spend so much time questioning yourself after your own lessons that when it comes time to teach someone else, you really have to flip a switch and be confident in what you have learned. The most rewarding thing about teaching for me is watching kids fall in love with music. When your young students have been working on something for weeks and finally get it, their faces are brighter than the sun.

James: There aren't many Rock bands that feature a violin player as a full time member. The bands that do feature them often wait for that epic ballad or swan song if they ever do include one. How do you approach playing it like a rock instrument?

Tory: It depends on what I think the song calls for. If it is a ballad, I'll write like it's a violin.
If it's a quirky song, I'll write like it's another lead guitar. If it's a hard rocker, I'll try and mimic some of the vocal lines- or I'll just pretend like I'm writing strings for Led Zeppelin's "Kashmir." Also bringing effects into the mix this past year has added a new level to my writing. 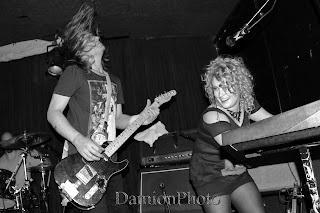 James: You have a very captivating stage presence.
I could be totally off here but you almost seem to take on a persona on stage. How do you see yourself when you're performing? How do you think you are perceived? How would you describe yourself off stage as opposed to what we see at a Those Mockingbirds show?

Tory: I don't think I necessarily have a persona, more so I'm just really happy. I'm kind of a stressed out person by nature but when I step onto a stage I leave behind whatever issues I have going on in my life and just play.
The stage is also a place for me to dress as I'd like to dress; I usually don't get the opportunity to wear a sheer cape and 5 inch heels  teaching kids.

James: You also play the keys in the band. How much of a challenge is that and which do you feel is your stronger instrument?

Tory: The keys are a bit of a challenge for me because it is my secondary instrument.
I've been playing the violin for over twenty years and studying the whole time. I played the piano when I was a kid and really only picked it up again a few years ago in college.

James: A lot of people are noticing the band. The record received stellar reviews, your playing out on a consistent basis and you have a shot of getting on Letterman.
How has playing in the band affected your every day life?

Tory: Sometimes I feel like working for success in a band is as frustrating as trying to explain a circle into a square, and it feels good to get some positive feedback and to have new venues open up to us. Knowing that people really like what we're doing has made it easier to handle whatever comes at us.


James: I understand you'll be heading into the studios with Those Mockingbirds in a few days. What's in the works?

Tory: We're heading up to New Hampshire in a week to track with Dean Baltulonis at
The Wild Arctic Studios, with Howard Willing mixing the record. Traveling out of state and camping in studio to record is a first for this band. I'm really excited to work with my bandmates out of our element; with no work, no bills, just focusing on our music. 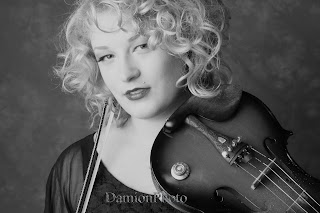 James: You recently stopped in at Hoboken's Water Music  to record with Dyvekah. How did the opportunity come about?

Tory: It's all John Agnello's fault! He texted me the night before the recording asking if I was available to track violin for an artist he was producing, and the next morning I was at
Water Music Studios in Hoboken tracking with engineer Sean Kelly. It was great working with such talented people, John, Sean, Dyveke and great sharing the track with Steve Shelley, Heather McIntosh, and Tad Kubler. I had a wonderful time and I really can't thank John enough.

James: Were you familiar with her work? I heard the two of you really gelled quickly.

Tory: I had never heard of Dyveke before the recording and I really don't know why, because she is very talented! Dyveke and I got along really well in recording and became friends during the whole process. After the tracking was done, the whole lot of us at the studio went out for some drinks. Dyveke and I discovered that we are both terrible at pool, and that we both started out with classical training and went "dark side," writing and playing rock.
I was surprised how well we got on and I wish that she was closer, not all the way out in Norway.

James: You mentioned earlier about the struggles of balancing the band with work, teaching and paying the bills. When your having doubts and wondering if it's all going to happen.
Is there someone or something specific that makes you realize that it will?

Tory: Nothing in the music industry is certain. If you're in this industry to make something happen, you're just going to let yourself down. There is no 'making it' and there is no miracle in signing to a label, there are just the fans and the music. I was born to play music and it's what I do, no matter how tough things are, I will always be playing music.