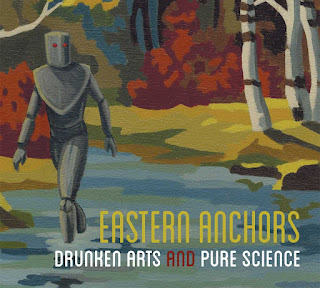 Musically, Eastern Anchors deliver all the catchy hooks you would expect from the best indie rock bands, however they also have a knack for infusing big heavy riffs into their  sound...it's like indie rock on steroids, and I like it.

On the Eastern Anchors debut album "Drunken Arts And Pure Science" the band lays down 11 tracks of perfectly crafted, hook infused indie rock with a heavy edge that to my ears lands them  somewhere between Built To Spill, Chavez or even Torch at times...check out the opening riff to "Herzog Help Me" to get an idea of what I am attempting to describe.  In closing, if you like songs that you can raise your fist and bang your head to, yet also sing the melody in your head for the rest of the day then I urge you to give the Eastern Anchors a listen.Also, if you like a record that unfolds and reveals more and more nuances with each repeated listen then this record is for you, "Drunken Arts and Pure Science" is an excellent album that simply gets better and better with each repeated listen...Dave G.