I had just gotten in touch with JJ of the Aquarian a couple of days prior to see if I could get a shot at covering some shows for them. When I got the green light I sent over a list of upcoming shows that peeked my interest. To my surprise and glee the letter X came up almost instantly.
I was well aware of the bands history and the current "Los Angeles" tour. When I couldn't accept the Saturdays Irving Plaza show due to prior commitments, I was bestowed with a pass to Maxwell's that very night. Perfect considering the club is just blocks from my home and I'd be able to catch them in a much more intimate setting.

As I walked into the room the film "The Unheard Music" was in full swing. In all of my years hanging out at Maxwell's, I have yet to see a movie screening. The whole vibe was that of some secret religious ceremony. A large number of worshippers seated on the floor interacting with the screen as if a sermon were being given. The crowd was older than I'm used to seeing there. Not a shocker considering X released the album Los Angeles over thirty years ago. There was one very animated character who was front and center to the screen that seemed to hang on every word often flailing his arms, singing along and even flipping the bird when the film focused on the A&R head that failed to sign X due to their harsh, unmarketable sound. 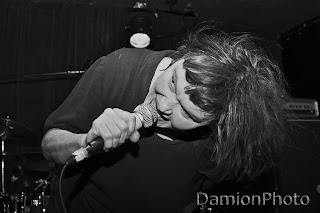 As the screen went up the crowd moved forward in anticipation of the mighty X.
I found a spot
(at least I thought) and got ready for what was about to happen.
The band took the stage to the cheers of the crowd.
The original lineup, intact and looking, pretty damns good. The band quickly launched into their set with the opening track to Los Angeles
"Your Phone's Off the Hook, But You're Not" and just raised the bar from there. As for me,
I was pitted between two very loving younger couples throughout the entire set. My positioning didn't allow for many creative shots.
At one point I actually saw an opening and jumped on the stage to get to the right side.
"Gotta get those shots of John Doe!!!" Yet as soon as I got back on the floor I found myself being scolded by some old timer who was filming the whole thing on his cell phone.
(The same guy that was yelling at the movie screen while filming it earlier. It seems I had gotten in front of his pal who was about a foot taller than me. Being the peacekeeper I am I diffused whatever Johnny filmmaker was yelling about and quickly found my old, familiar spot waiting for me. A song or two later I was so enveloped by the sounds of X, the thought of getting the prize winning photo of the night had completely left the room.

By the third song Xene who had looked a little stationary in the beginning kicked into high gear. Billy Zoom loomed large and carried the same swagger as in the bands heyday.
John Doe stood defiantly as he blasted through song after song and DJ Bonebreak pounded away in the background. Old classics such as "Johnnie Hit and Run  Paulene". "Soul Kitchen", "Sex and Dying in High Society" and "The Unheard Music"
All sound refreshingly new without losing their old Punk charm. Before the night was over they gave an acoustic gift in "See How We Are" and even came back for a short but blazing encore. As the set ended Billy Zoom dipped into his pocket to reach for his camera. Continuing his ritual to get shots of the adoring fans the band shared the night with.
(Pretty cool if you ask me.)  Shortly after the set I got to talking with the bands manager. He told me to stick around to meet the band and get some extra shots with them. I somehow ended up getting into a good conversation with Al Crisifulli of Dromedary records  (Something about making difference, volunteering, leaving a positive foot print.) and before I knew it, X had left the building. Needless to say, it was another memorable night at Maxwell's.  James Damion