My Rifle - Self Titled EP 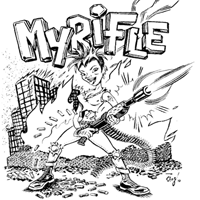 The long awaited, highly anticipated debut release of
My Rifle's self titled 7 inch EP is finally here.
For those of you not familiar with My Rifle, the bands personnel read like a New York Hardcore
Hall of Fame induction ceremony.
(Featuring former members of Life's Blood, Our Gang, Supertouch and Altercation,
just to name a few.)
The record really made a quick and lasting impression on this listener.
The songs are marked by excellent musicianship and production. None of which erase any of the songs raw energy. Though My Rifles sound is firmly planted in the band's hardcore routes.
They don't rely on old tricks or safe avenues to achieve their sound. Mixing Hardcore with Metal while adding different elements and angles that deliver powerful results.

The record opens up with "Fall On Your Sword", which has a fast, straight up, menacing hardcore sound. For someone who hasn't been involved in music for more than twenty years, Jason's voice hasn't lost any of the venomous appeal he originally displayed with the band Life's Blood.
Lews dark and murky bass lines really shine on the track and Andy Guida show why he's one of the most sought after drummers in Hardcore.
The next track "By the Grave of God" slowly grinds the listener under heal. The sound is dark and ruthless with its twists and turns, highlighting Hobi-One's guitar prowess.

Side two opens with "Stars" a short, too the point burst of power that's done nicely.
Storming the Gatekeeper", my first taste of the bands sound, is still my favorite.
They seriously click on all cylinders here. Showing the bands musical range and ability to take chances. The guitar work on here is Maidenesque. I was just floored.

Recorded by the bands drummer Andy Guida with Artwork by the legendary Sean Taggart. The record comes on clear vinyl. My Rifle's debut also marks the return of Freddy Alva's Wardance Records.
It just doesn't get better.