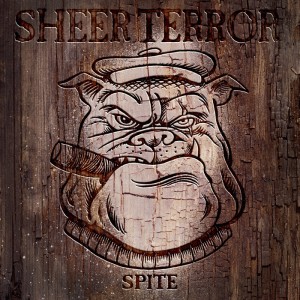 Not much has changed since Sheer Terror formed back in 1984 and with their first release in almost fifteen years, it doesn't look as if Paul Bearer has mellowed with age.
Spite finds the band in top form, delivering Reverend Paul's signature misery, bitterness, depression and dark wit.
The record opens with
"Blue Shadows Will Fall" which features epic guitar parts and a chorus you'll find yourself growling to immediately. The next track. "Heresy on the Monkey Bars" is so dark and chaotic that I can only describe it as beautiful.
It's amazing when a band can capture a mood so perfectly. Neither song will, however, prepare you  for the records B side. Here, the band  covers the Old 97's "Salome" rather perfectly. The song choice and its delivery throws the listener a most unexpected curve. It's a rally cry to say the least.
One that will surely elicit countless sing alongs and pile ons.
Fans of Sheer Terror know what they're in for. They know exactly what to expect each and every time. It's brutal, angry, miserable.
It's fucking Sheer Terror.
James Damion