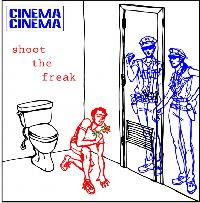 On "Shoot the Freak"  Brooklyn's Cinema Cinema put forth three noisy yet diverse tracks that quickly make their way into your subconscious and ricochet around like a stray bullet gone mad.
The EP opens with
"Lady Abortion" a  song so dark and phrenetic you would think it was suffering from schizophrenia.
I can't help but draw immediate comparisons to bands such as Unsane and early Helmet.
"Please to Meet You, Anesthesia" is a much calmer offering with a chorus  that has you singing along almost immediately, showing the bands diversity and ability to shift gears seamlessly.
The third track "Day Leash"
by far my favorite, seems to capsulate the best elements of the first two songs to craft one excellent offering. There are lots of different sounds, angles and vibes on the track.
None of which seem to prepare the listener for the descent it spirals towards in the end.
It's eccentricities make for an epic ending. It's unpredictably is notable.
Here is a band that really feels as if it is still growing and finding its sound. Something that I think most will really enjoy being witness to. Engineered by the legendary Don Zientara at Inner Ear Studios.  The band plans on selling  physical copies at  shows while the realease will be available on itunes and all the major digital outlets as of Tuesday, 10/11/11.
.James Damion