Ressurection - I Am Not Discography 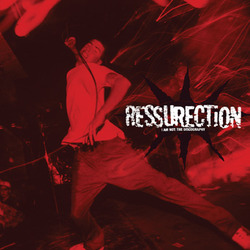 I can go all the way back to the days of
My Space being a relevant networking site (Maybe four or five years) when I first heard chatter about a possible
Ressurection Discography.
As more and more time passed my excitement, along with my hopes, faded. Now, thanks to Deathwish Records,
"I Am Not" Ressurection's complete discography is finally here. The bands entire output has been remixed and remastered. Something their album
"I Refuse" was in desperate need of.
The sound is excellent, bringing new life to a lot of the songs. Aside from the album, the bands S/T and Culture EP's, Compilation, Radio and other live tracks are included. Ressurection hailed from New Jersey and featured former and future members of 108, Lifetime, Deadguy,
Kid Dynamite, Paint it Black, Texas is the Reason, The Van Pelt, Jets to Brazil and others. As the band and its sound evolved they went from a more traditional HXC sound to a darker, heavier, more Metal influenced sound. It was  an interesting and extremely influential evolution.  The X2LP comes on white vinyl with a gatefold cover.
The band has reunited to play a handful of shows including This is Hardcore in Philly over the summer.
You can find more listings Here. You couldn't possibly ask for more. James Damion

Email ThisBlogThis!Share to TwitterShare to FacebookShare to Pinterest
Labels: 108, Deathwish Records, Discography, Hardcore, I Am Not, NJXHC, Ressurection