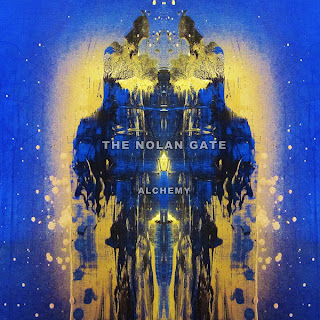 
One of New Jersey's longest running metal monsters has awakened from a 4 year slumber to unleash it's newest album "Alchemy" on the unsuspecting masses.

The Nolan Gate sticks to what they do best on this 7 song album which means you get big angry choruses, heavy rumbling bass, pounding drums and wave after wave of pummeling riffs to keep your head banging. The songs on this new album also have a bit of a looser feel to them, and Paul Andress throws in a few real nice black metal influenced riffs especially in the song Swordsman. I also feel that the vocals on Alchemy are the best that the band has delivered to date.

The Nolan Gate have been pounding it out on the Jersey club scene for 10+ years and in my opinion they are criminally under-appreciated. Please show the band some love and purchase a download of "Alchemy" for a measly $2.00 from their bandcamp page. I can only assume a CD or Lp is in the works as well so keep an eye out for them in the near future...Dave G.

The Nolan Gate features former members of Snag, Dahlia Seed, Mothman and At All Cost (NYHC) .
Posted by Dave G at 10:52 PM