Freddy Alva shares his thoughts on the upcoming Re-Issue of the New Breed Compilation. 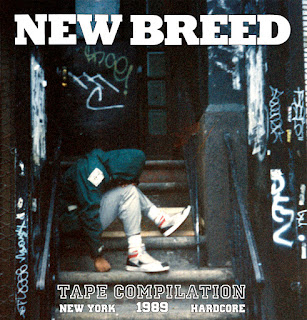 In 1989 Freddy Alva and
Chaka Malik of New Breed Fanzine unleashed an epic tape compilation that featured an astounding
thirty-five songs from twenty of
New York's very best established and up and coming Hardcore acts. After more than twenty years, a fair share of bootlegs and a very active Facebook page dedicated to it's memory; Freddy's recently reborn label is giving it a much deserved and proper re-issue. (For those of you that just went on Ebay to find a tape recorder, not to worry. The re-issue will be available in both Vinyl and CD formats.) As the days to it's release near I got in touch with my old friend to share some thoughts on the epic nature of it's release. Here's what he had to share. James Damion


James: There's been a lot of nostalgia and bootlegs regarding New Breed through the years. When did the decision to make it official happen?

Freddy: I've been thinking about doing a proper reissue for a while, ever since putting it up as a free download in '08. I felt that the compilation deserved a better fate than just an MP3 download & even though I included tons of memorabilia on the website/facebook page for the comp; an actual physical release would put it in its proper context. This all happened to coincide with me re-starting my old label up again. I decided to bring an old friend, Ryan Sikorski from Lush Life, in on the project.
I wouldn't feel comfortable with anybody else but us doing it, not that I'm a control freak, but this had to done just right. Myself & the people that worked on it, knew that we had to get a certain look & feel to it & I think we did justice to it: the final product is a fitting tribute to how NYHC (& our youth) was in the late '80s.


James: What about the choice to make it a vinyl release?

Freddy: From day one vinyl was the preferred format. Another old friend, Daryl Kahan (who sang for a band on the comp), did an incredible re-mastering job that begged for analog reproduction, so the Lp format was the way to go. He also did an amazing layout for the Lp & Cd. We are including the original full-size 20-page booklet that came with the tape plus a photo collage/liner notes. It all just looks better full-size, not to take anything away from the digipak cd version, but the lp will also include 4 extra tracks not on the original comp plus a "surprise" voice over from a CBGB's regular that some of you might remember.


James: Had there been any other label interest along the way? Or was this a Wardance release from its inception?

Freddy: Several labels approached me in the past couple of years about putting it out, but to be honest,
I just couldn't give this up to anyone else. Something that is, for all intents & purposes, my baby.
I know how to put out records & luckily I found the backing to fund this project, along with the technical know-how from good friends to do a quality release. Ryan Lush Life is incredibly supportive, he basically said: "Freddy, this is your vision & we'll do whatever it takes [or costs) to get it done". This whole thing is costing a pretty penny, but the end result far outweighs the decision not to outsource the compilation to any other label.


James: Will Chaka Malik be involved in any way?

Freddy: I got in touch with Chaka about 3 years ago about my plans to put up the comp for download & a possible reissue somewhere down the line. He was cool with the website/download, but was hesitant with the reissue. His argument being of how hard would it be to track down all the bands for approval & how will they be compensated plus the logistics of dealing with a record label; his past major label involvement (being in a band that got signed) had soured him on the whole music business. I let it go at the time, but then at the beginning of the year, when it looked like I could realistically do the LP. I sent him an e-mail refuting all his doubts: 1) I am in touch with all the bands on the comp, they are all more than enthusiastic for the thing to come out. 2) I'll make sure everyone on the comp gets a copy 3) I am putting it out so the buck stops with me. I got his new e-mail, through a mutual friend, & sent him my reasonings. I never heard back , so I can assume he doesn't care/is ok with it or he never received my e-mail. I sure hope it's the former, as he was the co-creator of the comp back in '88. Hopefully we'll be in touch soon & I can send him copies of this testament to an incredible time & place that we were lucky to be a part of. 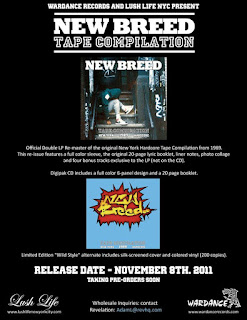 James: Are all the original tracks going to be featured?
Any new surprises ?

Freddy: All the original 35 songs are re-mastered on the Lp & Cd. The only difference is that the Lp will have 4 extra tracks: 2 by All For One, a band that was supposed to be on the comp, who says you can't rewrite the past? as well as 2 live tracks from Life's Blood with Sean Murphy singing @CBGB's in '88. As well as the aforementioned "surprise" voice-over. We are also doing an alternate silk-screened Lp cover (200 made) with the New Breed logo in Wild Style graffiti letters.


James: How hard was it to track down all of the bands? Were their any permission or legal issues involved?

Freddy: Like I said earlier, I am in touch with all the bands, at least 1-2 members of each band. I talked to Bill Willson from Blackout records, who's a lawyer now, about his opinion on if I should get contracts or any other legalities drawn up. He basically said that is such a minimal pressing (1,200 lp's/ 1,000 cd's) & I am doing everything out in the open; there's no need at this level to do any of that stuff. The whole thing is costing a lot of money, of course we hope to recoup, but the main thing is that it comes out the way we envisioned it.


James: Aside from Wardance, how will you be distributing the record?

Freddy: Right now, the 2 main distributors that we'll be dealing with is Revelation Records & Phantasm Imports. Mailorder will be through Wardance & Lush Life. The postage is gonna be ridiculous to send a 2X12" plus 20-page booklet, especially to Europe, so we are encouraging people to get it wholesale from those distributors. I can also do smaller quantities, so any DIY distributors can contact me.


James: Judging from the fact that the New Breed comp was basically launched due to your wanting to do something with the band Absolution. Will Wardance be releasing their future LP?

Freddy: Well, I can thank Absolution for (once) again inspiring me. Their '08 reunion shows encouraged me to start talking about the comp, then putting it up online, starting my record label up again... all the way to what we're talking about now, the reissue. They are in the midst of recording an Lp now for a really cool label, don't know if I'm supposed to mention the name, but you'll hear all about it once it's ready. I talked to them about the possibility of doing a 7" with new songs & they're into it, but now all the focus is on the upcoming Lp. I would be more than honored to do the 7", especially since recently interviewing Djinji & Gavin for the upcoming New Breed documentary that I'm working on with my friend John Woods. It's amazing how they can put everything in perspective, about things that happened 20-odd years ago, & the impact it had on our lives. Everything we're doing is not retro or nostalgia 'cause it comes from a place that's real. Djinji had a great quote when I saw him last: "Those days were great, I don't want to live in the past, but it's good to know we can revisit them & take what we need for the persons we are today".


James: You mentioned John Woods and the documentary. How did that opportunity come along? Who are some of the people you talked to? When can we expect the doc to be issued. Do you plan on having a screening at John's Nitehawk Cinema?


Freddy: The New Breed Documentary came about from talking to John Woods about having a record release party at his newly opened cinema in Brooklyn called Nitehawk. He suggested: "why don't we throw some live footage from the bands on the comp up on the screen?". That quickly escalated into hey, why don't we interview some of the band members that are still around & people that participated in the scene at that time. At present, we're trying to make a full-fledged documentary incorporating the interviews/live footage/photo & flyer collages plus a narration. Kinda ambitious, but we're trying to edit a workable rough cut to screen for people. The plan is that if we can get some backing down the line, we'll aim for a professional DVD release.

We did about 12 interviews so far with people like Djinji Brown, Gavin Van Vlack, Dave Stein, Carl Killing Time, Brendan Bad Trip, Bill from Blackout Records, Chris in Effect 'zine plus 5 others. It's a good mix of people that played on the comp back then, some did record ran labels/fanzines or just hung out & supported the scene in those times. We got some great material & I don't think there's been a NYHC documentary that's so specific to the years of '87 to '89. I know there's footage from the early 80's scene around & there's a NY documentary from the mid-90's. I think this illuminates an era that for many was a key turning point when CBGB's stopped having HC matinees & the scene splintering into various factions, at which point many people started choosing sides or left the scene altogether.

We were hoping for a mid-November screening date, but the reality of doing hours of editing while holding down full-time jobs/family obligations has revealed itself. We are trying just get it done & not stress out about a deadline. Like I said earlier, it will be a rough cut, until we can the find proper backing; hint, hint! Irregardless, we are committed to see this through; the stuff we've shot is golden & deserves to be preserved & documented. Once everything is in place, we will have the screening at Nitehawk Cinemas with Guest DJ's/Record Giveaways/Drink specials like the Raw Deal Dirty Martini or the Life's Blood Orange Mimosa! Keep an eye out for the invite on Facebook….