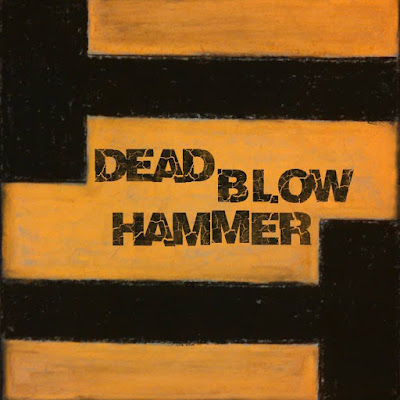 I was trolling the aisles of  my somewhat local record store the other day when my eyes were drawn to a vaguely familiar name on a very nondescript looking EP priced suspiciously lower than the small gathering of
7 inch records in the stores racks. Whether or not it was the discounted price or odd familiarity that had me take it to the counter along with my much anticipated vinyl reissue of Leeway's "Born To Expire" is unbeknownst to me. I was quickly reminded later that night that it was the band my Hoboken friend Adriano Garcia was fronting with old band mates from the 90's Hardcore act Against the Grain.


The opener "Not Tonight" doesn't really serve as a very good introduction to what turns out to be a generally good first offering from these old timers . "Transporting " follows authoritatively upping the skill level while ranking as my favorite of the five offerings. With "Controllable"  following as a close second. Dead Blow Hammer's sound runs in the "Loud Fast Rules" territory of Hardcore. Yet still finds room for some mid paced fun in it's two plus minute warnings.

While Dead Blow Hammer didn't  grab me initially. A few thorough listens had me finding more and more to like, appreciate and ultimately win me over. The bass lines of Kabula (Cause For Alarm, Agnostic Front) and the out of the box vocal charge of Mr. Garcia really put their hooks in me. Ultimately, serving serving as the EP's most distinguishing elements. And as I find myself losing interest in Hardcore. It's bands like
Dead Blow Hammer that bring me back due to a slightly different approach and delivery that keep me returning to the fold. James Damion

Order it Here
Posted by James Damion at 9:16 AM