What better way to spend a rigid, below freezing night than in a cavernous dungeon called The Meatlocker? Strange how a basement club I once promised to never return to now provides me with a home base to catch local and touring acts. Many of which have grown to become favorites of mine. With each descent down to the cavernous basement. I find myself becoming more and more of a familiar face there. So much so that I feel myself becoming a part of what's happening there. So here it is. Without ado, the years first show review.
James Damion

New Jersey's Dutch Boys started things off promisingly. Having downloaded their recent self titled EP from their band camp just hours prior to the show. 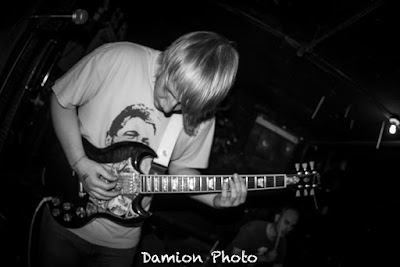 I was curious to see if a live set would fuel my interest in a band that was already feeding my reasons for getting there in a timely manner. The Emo Punk trio more than made my early entry worth while. Musically technical,
Dutch Boys set served as a reminder that Emo (for lack of a better description) isn't  about eye liner and wetting your skinny jeans over a sale at the mall. Reminding me of old favorites such as Saves The Day and Texas is the Reason. Bands they may not have ever even heard of. The band's set put me in a good place.
Dutch Boys

Next on the bill were Massachusetts Cherry Mellow. It's rare for me to look up a band I'm not  even vaguely familiar with before a show.  However, when the weather drops below zero and I find myself my questioning my need to venture out  It happens. After a glimpse at their band page and a quick listen to their band camp. (Yes, I cheated.) 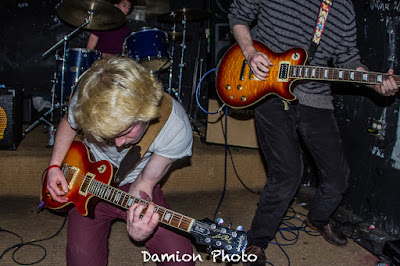 I was pretty much convinced that Cherry Mellow wax not my kinda thing. A few songs in and I received confirmation of just that. While not terrible by any account. There just didn't seem to be a purpose or reason why they made the pilgrimage to New Jersey. Were they a jam band or a joke band? Did I need a reminder that light shows and strobes have a history of initiating me to have seizures or, at the least, make my eyes feel as if they haven't seen a good nights sleep in over a week? No, I did not. Cherry Mellow, while not bad. Proved to be exactly what I expected. Honestly, I was just glad when their set was over.
Cherry Mellow

Luckily, Archie Alone were there to put things back on track. Easily said, Archie Alone's presence on the Independent music scene and this blog speak volumes to just how much of an impression they made on us all over recent years. The band I'd personally choose to launch my own independent record label. (A man can dream.) and one I'd urge every existing one to take notice of have more than earned a place amongst the acts that have helped form and nurture my musical conscience. 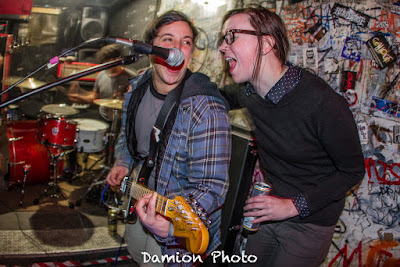 On this particular night the band played what seemed like a criminally abbreviated set. Perhaps due to the single thought that every one of the bands sets to date have left me craving and yes, begging for more. Over the last year or so, they've tailored their sound from their heavier, say Metal tinged riffing to a more emotionally cathartic sound.  Cue singer/rhythm guitarist Nicole Mesce's lyrics and vocal delivery for inspiration. One can't go any further when describing the bands growth without mentioning the growth and overall confidence Nicole has made as a guitarist. She really seems to be coming in to her own in the department. On an extra side note. I think bringing Pete Clark and his drums to the front of the stage during shows works perfectly. Not only does it bring an interesting  visual element to their sets. Ultimately, it really goes a long way in putting a spotlight on his talent and what that skill set brings to the bands overall sound.
Archie Alone

While I can't remember any dates,  (last just assume a year ago)  the last time I got to see Massachusetts's Snowhaus was the key reason I felt it so important to head over to The Meatlocker on this particular night. As with the many of the touring bands I've latched on to over the years. 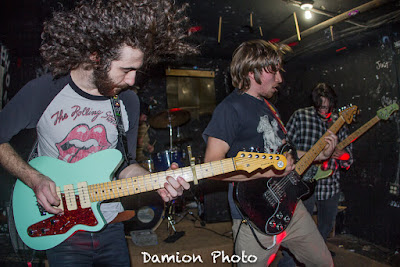 The chance to catch them play a show when passing through anything remotely close to home is too much to pass on.  I've found that in all of my years of going to shows, writing for fanzines and blogging.
The bands on the bill with your favorite local band often become personal favorites. Ones that, in hindsight, often turn out to be the bands you wished live closer or ultimately decide to pack up the homestead to relocate to your backyard. Snowhaus, for what it's worth, turned out to be one of those bands. Musically exceptional . Snowhaus tend to avoid being pegged down or thrown in to a ready made genre. What the band seem to tap in to is  a merging technical musicianship with a freeform style that is as fun as the bands unwound and fun stage presence. Needless to say, I like it. I like it a lot.
Snowhaus

Closing the night on a high note were the three piece act Basement Beers. Being somewhat of an old dolt when it comes to dumb band names. I really didn't expect much than dick and fart jokes from  these guys. Having enjoyed many dick and fart jokes in my time. That's not a bad thing. However, it does tend to limit things a bit. As the band launched in to that set. 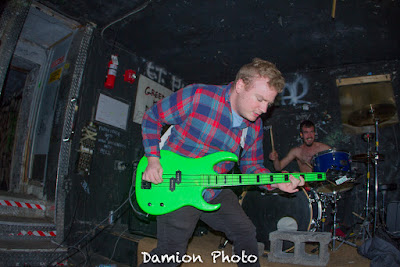 I felt as if a grade school teacher was popping like a quotation bubble in my subconscious. "What did I tell you about judging things by their cover?"
A reminder I sometimes need considering how much I loved them. The crowd, yeah. They loved them just the same. Only they seemed to know the words to every song. Thanks to Ana for the dance. I absolutely adore you. Now you know what everyone else already knows. I Have absolutely no rhythm.  Overall, I wish all the shows I went to were this much fun. I'm glad I'm finally starting to realize how much fun I can have if I let myself.
Basement Beers

As I close this long winded review out. I honestly can't go without showing my appreciation for Ana, Cindy and Nicole for the welcome back they gave me. It's people like them who make a scen worth participating in. Thanks