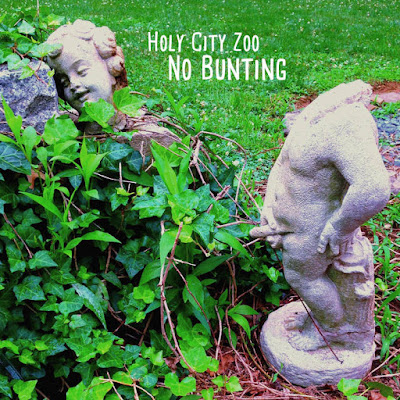 I've been sitting here listening to Holy City Zoo's debut full length since it welcomed me home from Japan twenty plus day ago. Three weeks later and I still find myself struggling to find the appropriate words to describe my feelings in regards to an album I rooted so heavily for, but wasn't quite convinced would ever see the light of day. Doubts and fears caused by a year of deafening silence and inaction from a band that  has been featured here regularly since the blogs conception. If hindsight is 20/20. 2015 Was a year well spent for Frank, Joe, A.J. and Brian. Time spent creating an album that, by all means, is deserving of attention and praise from all angles of the music spectrum.

On their first full length "No Bunting" Holy City Zoo explore new territory musically without forgoing the ballsy nihilism that made them stand out in the first place.  The twelve song set opens curiously with "Memo" and it's Kraftwerk/ Devo / Revenge of the Nerds inspiring intro. A three minute jam that could fit easily on the space shuttles mix tape.The title track           "No Bunting" follows bringing the bands back to earth with that chaotic weirdness that always served them so well in the past. "We are the War", (This track is so fucking good.)             "Saw a Bush" and "Stan Lee's Cup" each highlight the bands gift for creative nihilism.      Tight and nasty with a flare for the eccentric.

Whereas HCZ have often found themselves navigating territory between the nihilism of           Rye Coalition and the more technical side of say, The Foo Fighters. "No Bunting"  shows the band exploring more of the technically savvy and experimental areas of their sound.           Most evident on "Even Steven gets the Blues." (My personal favorite.)                                     A song so eccentric and experimental. You would think there was a Fugazi like poltergeist lurking somewhere in the studio when it was recorded.
While I regret taking so long to write this review. I feel that it allowed me to thoroughly take in all the different nuances and elements the record has to offer. Overall, it had me scratching my head. Wondering, how could this possibly be the bands first full LP. As many of the acts that fueled the early days of this blog have faded ... Holy City Zoo continue to grow and mature musically, adding new and dynamic components to their sound without losing touch with what originally drew us to them. James Damion