Growing up in Jackson Heights Queens. Astoria was our first right of passage as far as escaping the invisible borders of adjacent Elmhurst were concerned. In reality, the same thing could be said about New York Hardcore. While my first High School Msgnr. McClancy had it's small, yet tightly knit fabric of Hardcore kids to show me the ropes. It wasn't until my excursions in to Astoria with them when I was able to see and hear the real thing up close and personal. 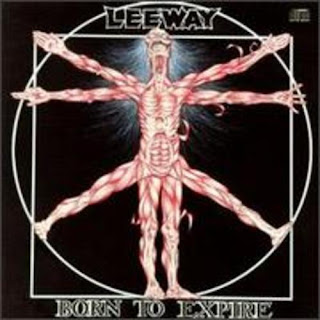 Bands with names like
Token Entry whose fast and aggressive approaches to Punk and in Leeway's case "Crossover" would eventually bring me to the haloed doors of CBGB's, the Sunday Hardcore matinee and eventually
The Rock Hotel shows at the Ritz. Then, just as I had begun to find a home and an extended family in CBGB's and the clubs that were inviting this strange and sometimes dangerous form of street music in to their doors. Things seemed to change overnight. Crossover came and sucked away many of the bands. I hated it, with one glaring exception, Leeway.
The reason, Leeway were always a Crossover band. Even before Crossover became part of my vocabulary. For Leeway, owed more to Thrash Metal than they did to bands like Antidote, Agnostic Front or any other Hardcore band that may have come before them.
As 1985's "Enforcer" demo were a combination  calling card and wake up call. 1989's "Born to Expire" served as a perfect time capsule for the era and a landmark release for Leeway. One that would go on to define them as a band.

Upon hearing about a vinyl reissue of "Born to Expire" as well as their later releases began circulating. I knew that the redemption I had been seeking since deciding to sell all of my records in the year 2001 would finally arrive. Listening to old favorites like "Rise and Fall", "Mark of the Squealer", "Be Loud" and "Enforcer" on vinyl for the first time in over decade brought back my love and appreciation for the band. Recalling the first time I saw them live at the Ritz and getting my hands on a copy the day of it's original release in 1989. Listening to it this week with new ears, discovering a new favorite in the albums final track "Unexpected" only sweetened the pot. And while the live bonus tracks are great. I'm pretty confident in my belief that even the most pedestrian fan of the band would be happier with the incredible 1985 "Enforcer" demo. Overall,  this is an essential re-issue that satisfies on many levels. Whether you love Hardcore, Metal, Crossover or all of the above. This is a must have. One that will most likely go out of circulation before long.  The album, as well as Leeway's "Desperate Measures", "Adult Crash" and "Open Mouth Kiss" are available in various vinyl colors as well as CD format from Reality Records.
James Damion