While the name "While We Wait" might read like the perfect handle for two guys waiting for the next thing to come along. The bond between Andy Guida (Altercation, Supertouch, Absolution...)  and Matt Warnke (Bold) go back to their time together in Running Like Thieves and more recently The Mistaken. 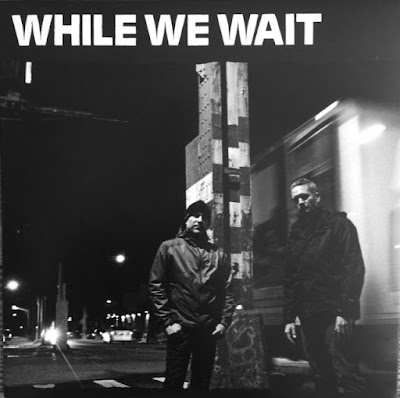 Less Bluesy and more connected to their Hardcore past than
The Mistaken were.
While We Wait's approach to Hardcore is more melodic and for lack of a better description, subtlety pronounced.

The EP opens with
"Kings Ransom". A song so ambitious with it's revved up guitar part, up front drum leads and emotionally drenched vocals.
The epic nature of
the song bring to mind the long lasting effects of Hardcore greats Supertouch and their landmark song "Searching For the Light" (A band for which While We Wait's Andy Guida played. a key role.) To even attempt describing the deep pull of the "Kings Ransom" without mentioning the emotional grip of Guida's backing vocals would be damn near criminal.
"By Now You Should Know Right From Wrong" follows respectfully with similar results before "All the Plans You Made" finishes the three song sample like a statement of purpose. It's all systems go with Matt's deep and soulful vocals belting out lyrics with both authority and purpose. Having listened to this a couple of dozen times  continually over a twenty four hour period is without pause, the highest recommendation I can possibly give.

Maybe it's time we move on from familiarizing ourselves with artists by mentioning or comparing their work to what they accomplished decades ago. Leave your preconceptions of what Hardcore kids can do as adults in the past and just listen. You might like what you here. I know I did. James Damion

Available Here
Posted by James Damion at 9:27 AM