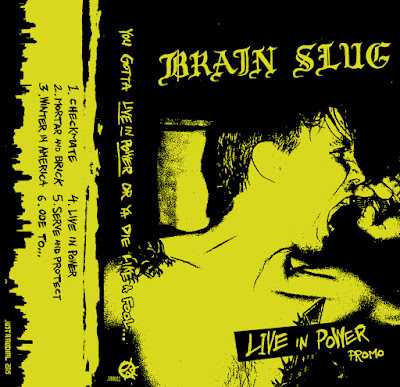 Long Island's Brain Slug first came on my radar when they played a rare Hardcore bill at Steven's Institute of Technology in Hoboken. On a night when I was on a mission to see a personal favorite of mine in Living Laser.
My eyes and ears were opened to a score of bands, including
Brain Slug, that would more than earn favorite status through their blistering performances that night.

Dirty, grinding and ugly. Three elements that initially drew me to Brain Slug's sound nihilistic approach. Three key ingredients that keep me interested. There approach to Hardcore brings to mind bands such  as Straight Ahead, Rorschach, Citizens Arrest
(There's a cover CXA's "Serve and Protect on here.) and power violence kings Man is the Bastard. Amongst these six killer tracks there is also a cover of The Beastie Boys "Ode too..." from the bands 1982 Hardcore EP "Pollywog Stew".
The six song promo tape serves as an appetizer for the upcoming full length album where each of the four original songs will make an appearance. If "Live in Power" is any indication of what's to come in the near future. Fans of Hardcore will have one hell of a record to look forward too. I, for sure, can't wait. James Damion

Order it Here
Posted by James Damion at 9:18 AM