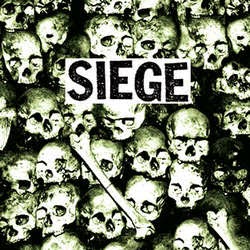 I sometimes find it hard to digest that after 30 years involvement in Hardcore music as a fan, participant and fanzine editor.
There still seems to be a shit load of bands and recordings I've not even remotely heard or heard of. A truth that sometimes makes me wonder if I've had my head firmly place in the sands of an exclusive beach just off the shores of the east river.

Drop Dead celebrates the 30th anniversary of the original nine recordings, fully restored, with original outtakes as well as two bonus tracks from the 2006 reissue as well as bonus tracks from the 2009 reissue. Add it all up, this is the most complete collection to date. While Boston, MA.'s Siege and these nine 1984 recordings may not be known to the masses. The band allegedly was a major influence on classic bands such as
Drop Dead, Heresy, Infest and Ripcord to name a few. Raw, scathing and brutal.
While this was definitely not my thing. I would recommend this for both fans of the bands mentioned and hardcore archeologists alike.  The album comes on opaque green vinyl, features song lyrics and info on the back cover (There is no inlet included. Just the sleeve.)  and unfortunately does not feature a download code. James Damion

Deep Six Records  Buy it Here
Posted by James Damion at 8:22 AM