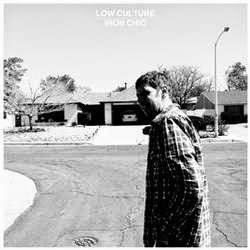 I don't know about you, but as far as I'm concerned. Whoever it was that came up with the idea to make the first split 7' inch EP needs to have a monument erected in his/her honor. Most importantly, it should feature two completely different sides that show the differences... little or small and their overall uniqueness.

The idea for this particular split came like many before it. While two bands, Iron Chic and Low Control were out on tour. While the two bands shared bill along the east coast, southwestern desert and further north in Canada. The idea to not only make a split record, but to complicate matters further by turning it in to a split label release between
Mike (Iron Chic) Bruno's Dead Broke Rekards and Chris (Low Culture) Mason's Dirt Cult Records.

This split gave me my first taste of the band Low Culture. The mix of melodic Punk and southwest flavor is addictive. I was immediately drawn to the band due to this two week sample. I'm looking forward to hearing their demo,  s/t 7 inch and LP Screens soon.

As for Long Island NY's Iron Chic continue to raise the bar as one of my favorite "go to" bands for an uplifting energy buzz PMA booster that's helped me get through my day, my week, my month and even my year. The bands uplifting melodic punk always rates high on my list. Go pick on up now. James Damion